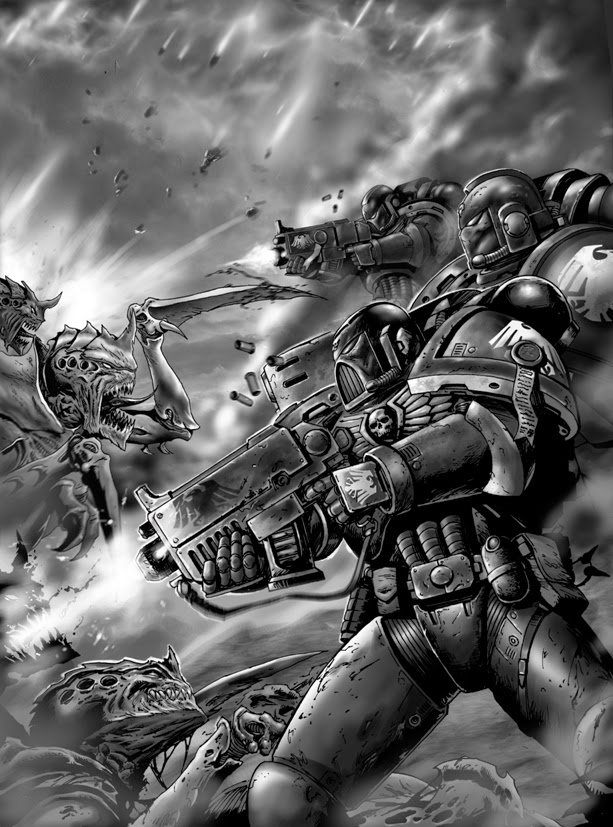 They come standard with bolters, bolter pistols, frags and crack grenades and fury of the legion. And Because they are Raven Guard Infantry, they come with Infiltrate and Fleet.


Fleet is also very powerful. It can be used defensively to run away or scramble to objectives. Or is can be used to run forward or help get charges off.

They also come with some solid squad upgrades. Unlike in 40k they don get special and heavy weapon choices, but they do get an option of an additional ccw weapon. I almost never see people take this, but it's actually really quite potent. For 2 points you do as much damage as a 15 pt marine in hth, and unlike other legions we get infiltrate and fleet which both help us actually get in hth and use those extra attacks. And with infiltrate Raven Guard can deploy so that they can pick the hth match ups.

The other two interesting options is the nuncio-vox and the legion vexilla. The nuncio-vexilla is great for Raven Guard. It can help deep striking list be considerably more accurate and can help spot for artillery. The vexilla lets you re roll leadership. In a lot of other legions it's almost an auto include. In Raven Guard, I'm usually running my tacs with an IC with fearless or naked.

You also have the option upgrade the sgt. What you take on him basically dictates how you will use the tac squad. Artificer armor is great for a pure shooting blob where he will be the closest model and suck up returning fire. In a squad that will see hth, I tend to additionally give him a power axe and melta bomb. Otherwise run him naked.

Finally, they also have options to cheap transports. This is another huge boon often overlooked. The basic rhino is hugely versatile and a strong choice for maelstrom or objective mission. In addition, you can take a drop pod (with decapitating strike). It's a fairly powerful option that is almost unique to Raven Guard. It allows Raven Guard to play re-actively against our opponents.


But wait!!! Where are the 15-20 man squads with vexilla and apothecaries?

True. You see these in tons of other legions. And feel no pain is a strong rule. But Raven Guard are not a rule set that favors "weathering a storm". Other legions do that better than us. Instead we have resilience by deploying in reserves or by front loading damage so the enemy has less to shoot back at us.

I generally use all my elite slots for Mor Deythan, termies, rapier platforms, etc.

Do you have any thought on Raven Guard Tacticals that I missed?

Are you talking about 511 tactical kilt