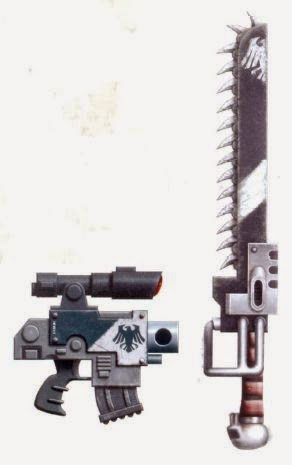 Wargear is especially interesting for the Raven Guard legion. You can't think Raven Guard without thinking lightning claws, but on a deeper level the XIX Legion pioneered the MK IV "corvus" armor (aka Beakie armor), which was the most technologically advanced power armor at the time of the Horus heresy. In addition, their home world of Deliverance has it's own forgeworlds and they were known to commission unique variation of wargear and vehicles, including the whisper cutter, death wind drop pod and the dark wing storm eagle.

One of the major differences between the way the Legions play is their wargear and Raven Guard are no exception. To the Review!

The Raven's Talons - For 10 pts, you can upgrade all the lightning claws on a model to be master crafted and rending. So basically it's the weapon Shrike has in 40k. To be honest master crafted alone is usual 15 pts. And if you have two claws, they are both master crafted, so you get 2 re rolls IMO. So from that perspective it's a pretty solid deal. That said a single claw is usually 20 pts and 2 is usually 25 pts so with the upgrade you are talking roughly 30 or 25 points, which is not cheap. Lightning claws are meant to shred infantry, so the claws give you a chance to hurt 2+ armor. It's obviously fluffy as hell for Raven Guard, but is it worth?

Depends on the unit. So let's look at units:


Infravisor - Any character can get night vision for 5pts which translates tot he entire squad. It has the downside of taking blind tests at I1, but that is a pretty rare situation. In general, it's a pretty efficient upgrade, but there are not really that many units it makes sense with. I would only take it on shooting units that rely on low AP

Units that should take Infravisors:
Cameleoline - 5 points for stealth might be the best deal in the game. I'm serious. You should take it on every single IC that can. NOTE: Alvarex Maun CAN take it. Unlike 40k there is no riders that prohibit him from taking Legion specific Wargear.

Unit's that should take cameleoline:
Fractal Harrow Blade - First off it's a Raven Guard specific relic. So a lot of tournies might not allow it. It's 35 points, it gives you +1 str, ap3, rending with a blood ruin rule that doubles the kills by that model by 2 for combat results. The interesting thing about it is that it's a passive rule, so you can use it with a paragon blade! So if you want to go crazy and break big units and run them down, maybe a praetor on a bike  or with a jump pack might be fun. And for 35 points, you are likely auto breaking a unit, which is powerful. Is that worth 35 points? Maybe. It's definitely not an obvious deal and I general believe we have better places to spend points than beat stick characters.

Hello, iam reading petehappens a while. I like it but i have a question. You say Captain Maun can take camelioline. He is a unique Carakter with his own wargear, why do you think he coeld get more as he had?

Interestingly, in 30K, unlike 40K, named characters are not restricted from legion wargear. It's legal.You see it in other legions as well.