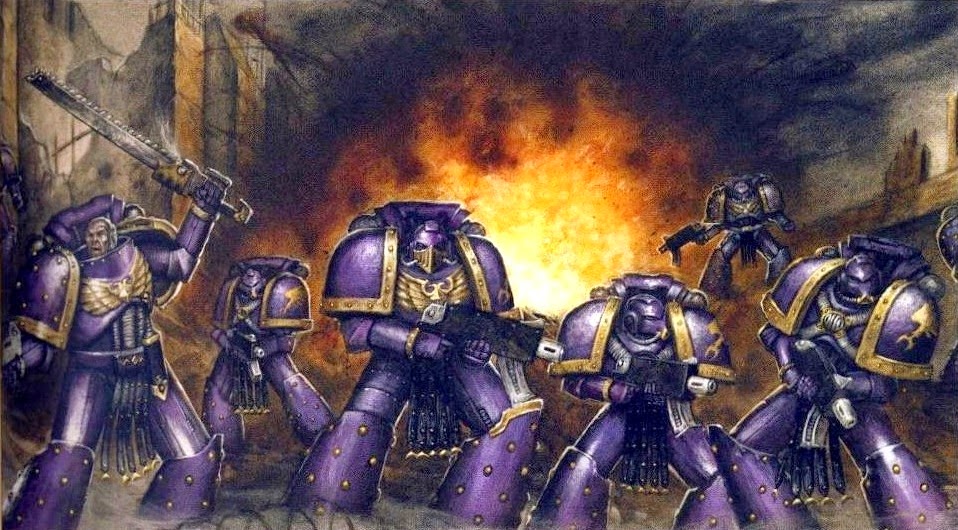 Last Week I got a game on against Jason, who I linked up with through the Heresy 30K blog. Great guy with a beautifully painted Emperor's Children list.

We decided to play the city fight rules from HH book 4 and rolled the Uphill battle deployment and the Vital Prize mission, which is basically the relic but with special rules. The relic was a Carta Bellicosa, which gives move through cover and fleet. For second there was Slay the war lord, first blood, and last man standing.

Even with my re roll, he won first turn and deployed in the back left corner with his tanks in a line. The order was predator, land raider, rhino, assault marines, rhino, predator. The relic was placed in the middle of the board, which meant neither of us could deploy in that terrain piece. This effectively kinda screwed my infiltrating alpha strike, but the middle piece or terrain was LOS blocking on the back side so I hunkerd the big squad behind it. The mor deythan lined up in rhinos closer to me. The rapier platforms I set up with shots to all the predators. I put man in a rapier squad and the las tac as rear guard in a rhino.

I seized the initiative with the Maun Re Roll!

The first mor deythan rhino went into the middle terrain piece and turned side ways. The mor deythan deployed up on the second floor of the building looking down on the assault marines.

The second mor deythan squad goes straight at the spartan, turn side ways and pops smoke.

The big tac unit runs into the ruins and grabs the relic.

In the shooting phase the mor deythan kill 14 jumpers and the rapiers do 4 hull points to the spartan, 1 to a rhino, and 2 to a predator. 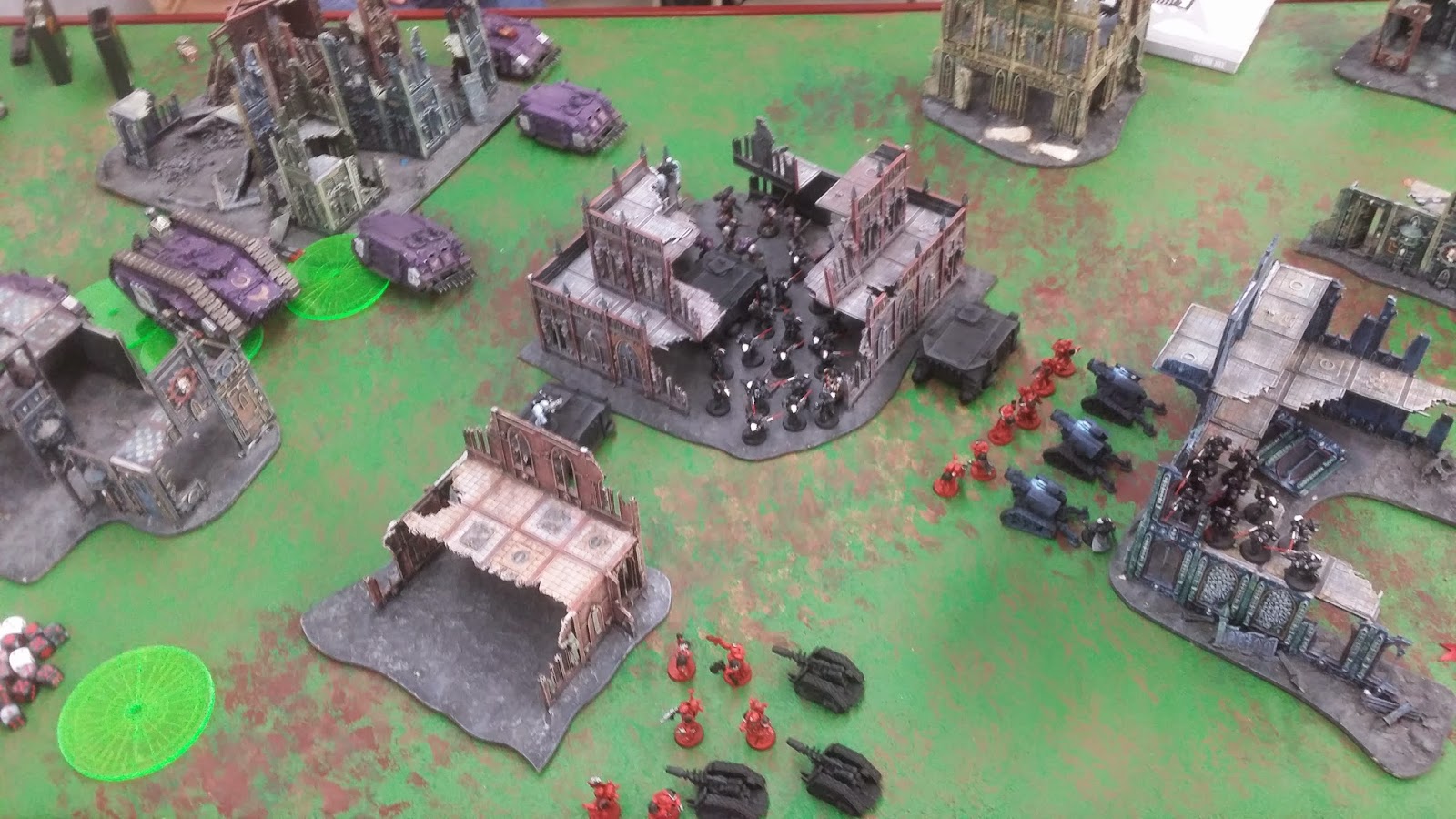 The Emperor's Children respond by moving forward the Spartan and unloading all the tacs. The assault marines jump into the big terrain piece.

The spartan is shooting snap shots only, but mange to peel off two HPs on the rhino. The predators fire into the big squad. The first predator manages to only kill a couple of his own assault marines and the other predator kill 3 marines. He quickly realizes that everyone is basically 3+ cover saves and that he is going to have to get the relic by hth.

The tacs all double tap into the 1st mor deythan squad and wipe them out. He charges the big RG tac squad with his assault marines. The chaplain has a boarding shield so they don't get their charge bonus. He issues a challenge and I refuse. The big squad fails to kill any in over watch, but with everyone getting 2 attacks with a re roll to hit, I manage to chew through the assault squad with minimal losses.

At this point Jason mention's he had no idea that the tac squad were going to be that good. And laughed it off that maybe that was a bad charge choice. 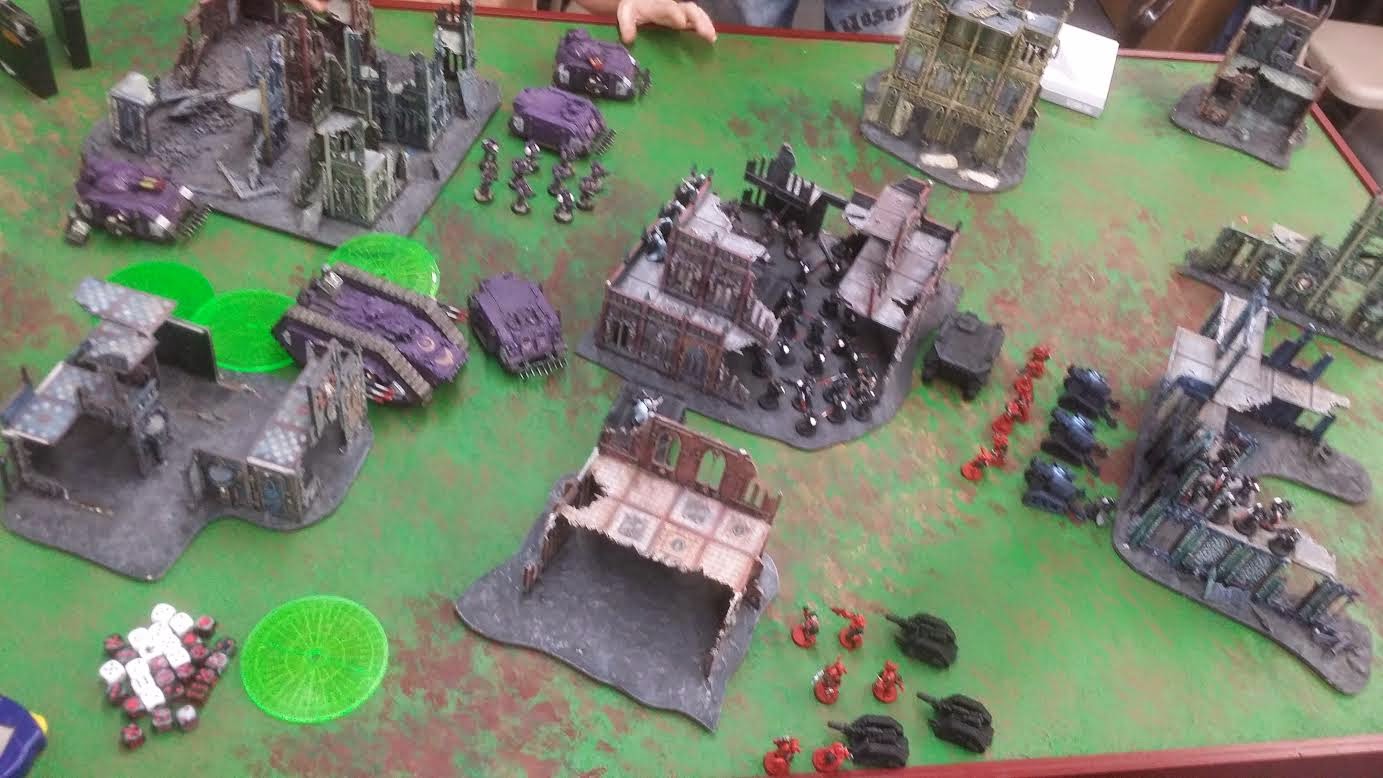 I move my mor deythan into position to kill the termies when they get out of the land raider.

The big squad moves 6" away from the enemy and I retreat with the middle rhino and place it in such a way as to block a lot of shooting at my big squad.

The rapiers shoot using Maun as a spotter and pop the land raider and a rhino. The other squads  does 3 glances, but Jason saves them all. Actually he had been doing pretty well on the cover saves on the vehicles all game.

I decide to shoot 2 combi flamers at the termies from inside the rhino and rend with them. Not ideal but my rhino only had one HP... I kill 3 or 4 termies.

Jason decides he has to chase the tac squad. The termies, ignores my bait of the mor deythan squad, moves forward and double tap their combi plasma, and kills on 5 of them. One other predetors also gets a shot at my rapier squad and it scatters onto my tacs, killing a couple more. The other predator pops the mor deythan rhino. One EC tac squad gets in a rhino and moves 12" toward the big RG tac squad. The other tac squad runs forward.

Fire raptor deepstrikes in off of Maun. (Forgot about it turn 2... doh!)

I create a wall of rhinos in front of the termies, which would effectively speed bump them from assaulting or getting much movement this turn.

The Mor deythan squad manages to wipe out all the termies accept the praetor. The fire raptor and big tac squad chews up the EC tac squad and kill about half the squad. The reaper batteries fail to get through the cover saves of the predator.

The big tac squad charges the EC tacs squad and kills them off.

We call the game. With maun in a tac squad ready to jump in a rhino, and all the other stuff I have in the way it's obvious, he's not going to get to the relic.

I think when I pulled out the grav cannons and he pulled out the spartan, he said shit and I said sweet. On my side, I was a little greedy and didn't kill the spartan first turn because i was trying to get the predator at the same time. That said, Jason said it was the first time the Spartan had died.

His only regret was that he was under aggressive with the spartan and termies, which might have been a big deciding factor in the end. He also sportingly put the objective in the middle of the board.

Me seizing the initiative was also huge. It let me get ot he relic first and lock it up all game. Maun continues to impress with his re roll, not to mention I used him for spotting, a reserve re roll, a scatterless deepstrike and a +1 cover for a rapier unit. Being able to shut down the spartan early set the tone of the game. Not to mention, it also put my other Mor deythan in position to kill 3/4 of his assault squad turn 1.

The rapiers also did really well. They took 5 HPs off the spartan, 2 HP of each predator, 3 off one rhino and 1 off the other.

All that said, the true mvps were the big tac squad. They basically ate all the fire power the enemy could put out and killed a tac squad and an assault squad in hth. This squad continues to impress and surprise opponents with it's resilience, versatility and damage output.

I also liked the boarding shield on the chaplain, the defensive grenades were solid and I tried to throw a grenade and blind him but it didn't work... Next time maybe.

Thanks Jason, and I look forward to a rematch!