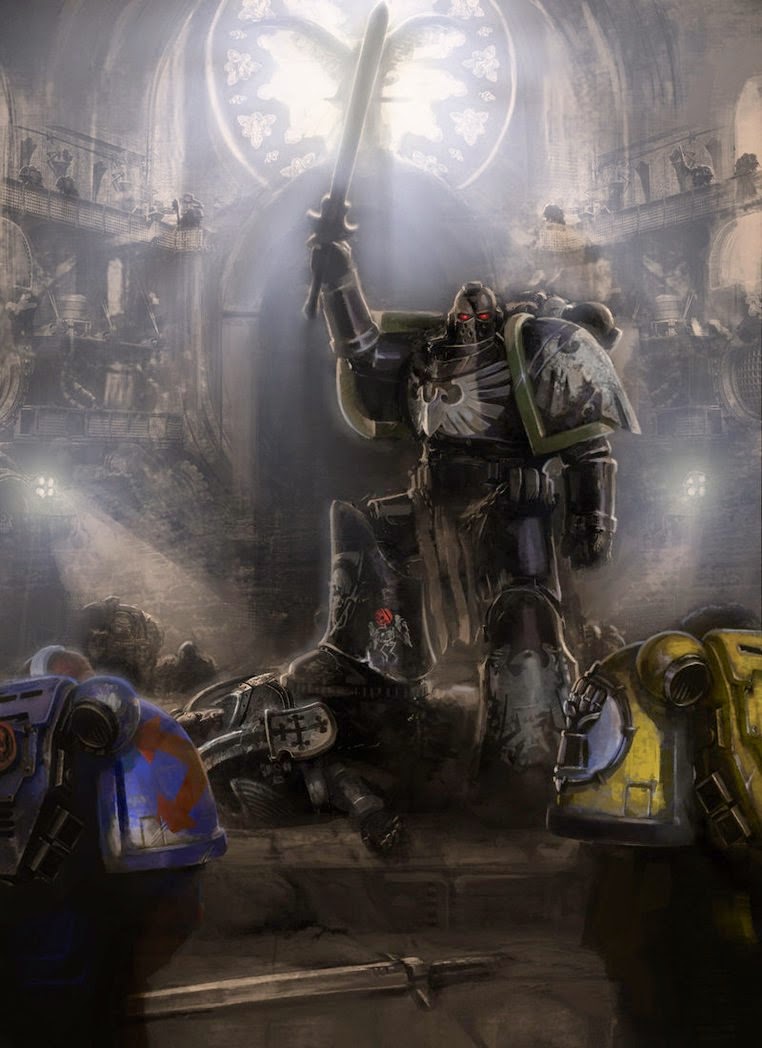 The Chaplains are the spiritual leaders and the warrior priests of the Space Marine Legions. I have always loved the imagery of Raven Guard Chaplains. They are decorated in the bones of large birds and feathers and have a distinct, dark shamanistic feel about them.

On the table, I generally don't see that many Chaplains fielded. They are often overlooked for consuls that have special rules that are easier to translate to the battle field. But Raven Guard Chaplains in particular have sneaky ways to add all sorts of force multipliers to a unit.

They are relatively inexpensive coming in at only 85 pts. They come with a power weapon of your choice. I also always opt for the cameleoline as it give Chaplain and his entire squad stealth for only 5 points. I also think a melta bomb is a no brainer as he can re roll to hit with it, and get +1 strength if you give him a jump pack. And finally, I usually go with artificer armor and a refractor field or a boarding shield. Refractor obviously let's you keep the extra attack, but....

Why the boarding shield? Beyond looking bad ass, boarding shields give you defensive grenades, which makes charges against you disordered, but more importantly, they have the blind rule if you throw them. Combo them with Rapier grav cannon platforms that have the concussive rule and you are now force your target to make blind tests at Initiative 1. If they fail, they are now BS1 and WS1 until the end of their next turn. So now you are hitting them on a 2+ and they are hitting you on a 6+.

Oh and if you are allowed to use relics, take the Void Field Generator!!!

The Chaplain also comes with the Zealot rule, which truly makes them a terror.

Chaplain and his unit with Zealot:
So this rule can be a huge force multiplier with the right units. So what units do you run him with? Well HTH units obviously... But there are a couple very efficient options to consider.


Beyond that, the Chaplain makes all unit better in hth. I'm sure there are other combos, especially with allies, but the one above are the ones I use to great success. That said, they obviously make Destroyers and assault marines a lot better too, so if you are going to run those units, a Chaplain is worth the look.

I dont see RG chaplains as the holy enforcers of the emporer, for me there the battlefield tacticians , analysing and directing forces for the Legion command on the ground.

The RG is grounded , its not a religious troop , Corax , for me is the most practical and comprimising of the Primarchs , willing to listen to his troops to get the job done, and this shines through the chaplains.

Later in 40K its relogious but in 30K, not so much for me

It's an interesting take of them. To me I've always found the relationship Corax has with the Emperor interesting. Corax and the Raven Guard fight the hidden, gloryless war that must secretly be fought. To me chaplains are an embodied reminder of this relationship with the Emperor. I've kinda always thought of them as battle leaders as wel in Raven guard forces.

Hi,
I wanted to ask how are you using the blind and concussive combo. Doesn´t concussive apply only to wounded models, not the entire squad?

Yes. It's a good point. Only good against multi wound models and even then all of them have to be concussed. So it will likely only show up against single models.

That said, it's a good way to say goodbye to a primarch.