One of the more frustrating things you will run into when building a Raven Guard Legion is the lack of uniformity in tactical markings during the time of the Horus Heresy. In addition, there have been a couple confusing example put out by GW along the way. I'm putting this thread together to try to save some of my fellow XIX Legion generals some head ache.

In the Index Astartes books of yore GW actually put out some suggestions or preheresy vs post heresy tactical markings. At the time, it created all sort of Jamaican Rasta looking armies as fans started to paint all tacs in green, fast attack in red, etc. This is still a throw back fan concept for some who like the look. 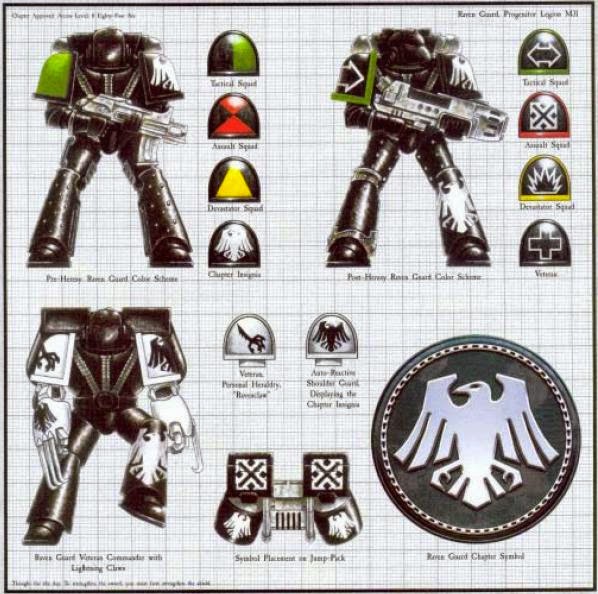 Flash forward to current examples, I think most agree that  the colors are based on Company colors:

Additional, confusion from this image comes from the fact that Legions have lots of Chapters (1000 Astartes), which are broken down to 2 Battalions (500 Astartes each). Each Battalion has 5 Companies with 100 marines, each broken down to squads of 5 to 20.

In 40K, the space marine chapters are a Company strong. 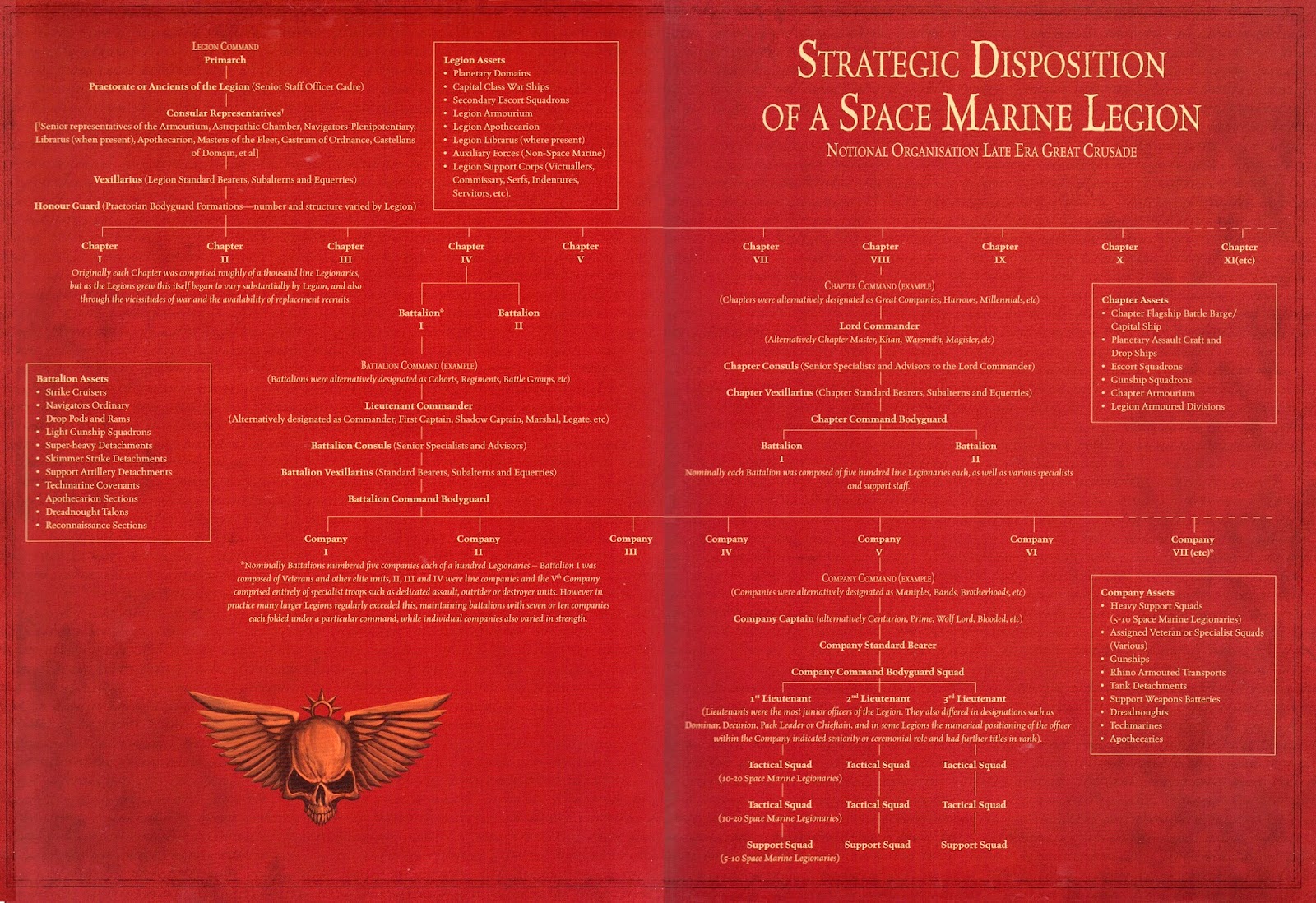 The most recent artwork put out by Forge world, removes the concept of trim color across the board, and gives examples with black or silver trim as you can see in the following examples.

From Left to Right (Based on the text that goes along with these pictures): 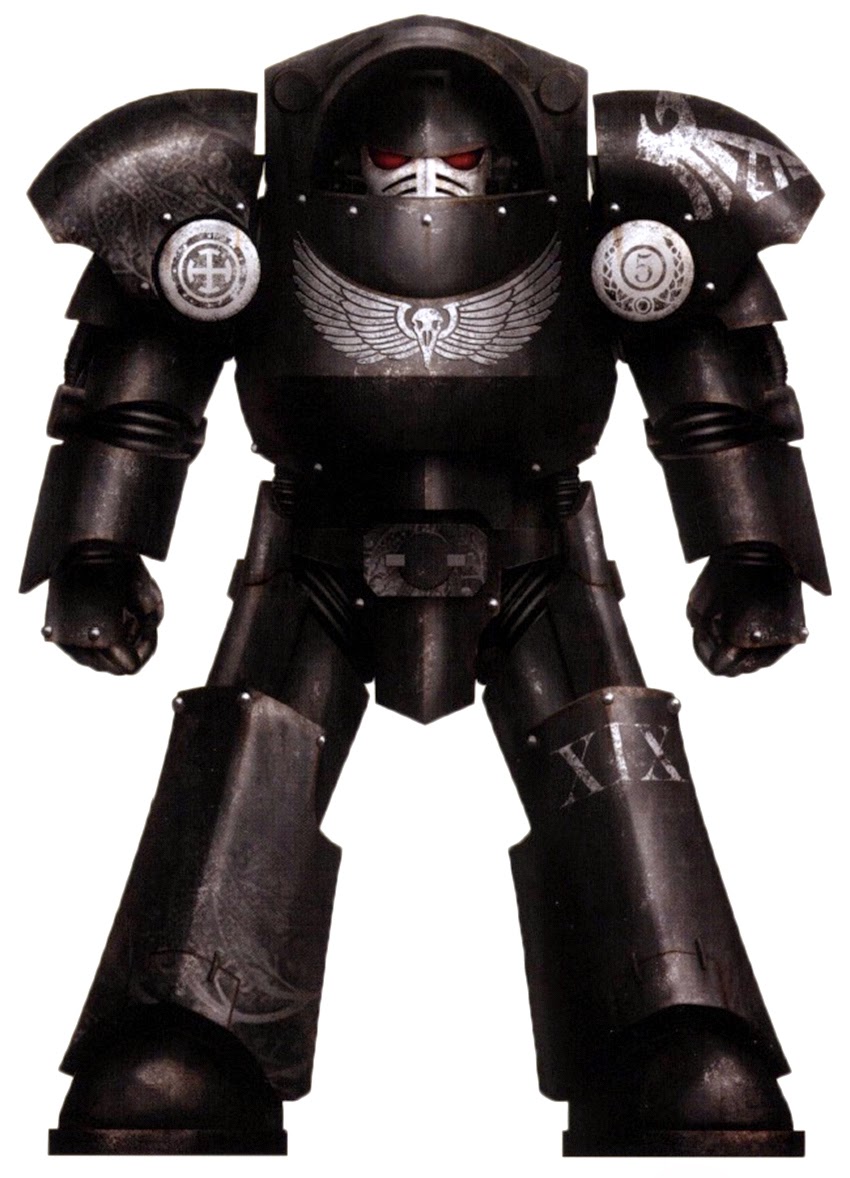 Forge World also put out shoulder pad tactical markings. Which are very cool but kinda ambiguous, as they don't exactly line up with squad types across the board. Although it is nice that they at least match the index astartes should pads, minus the color. 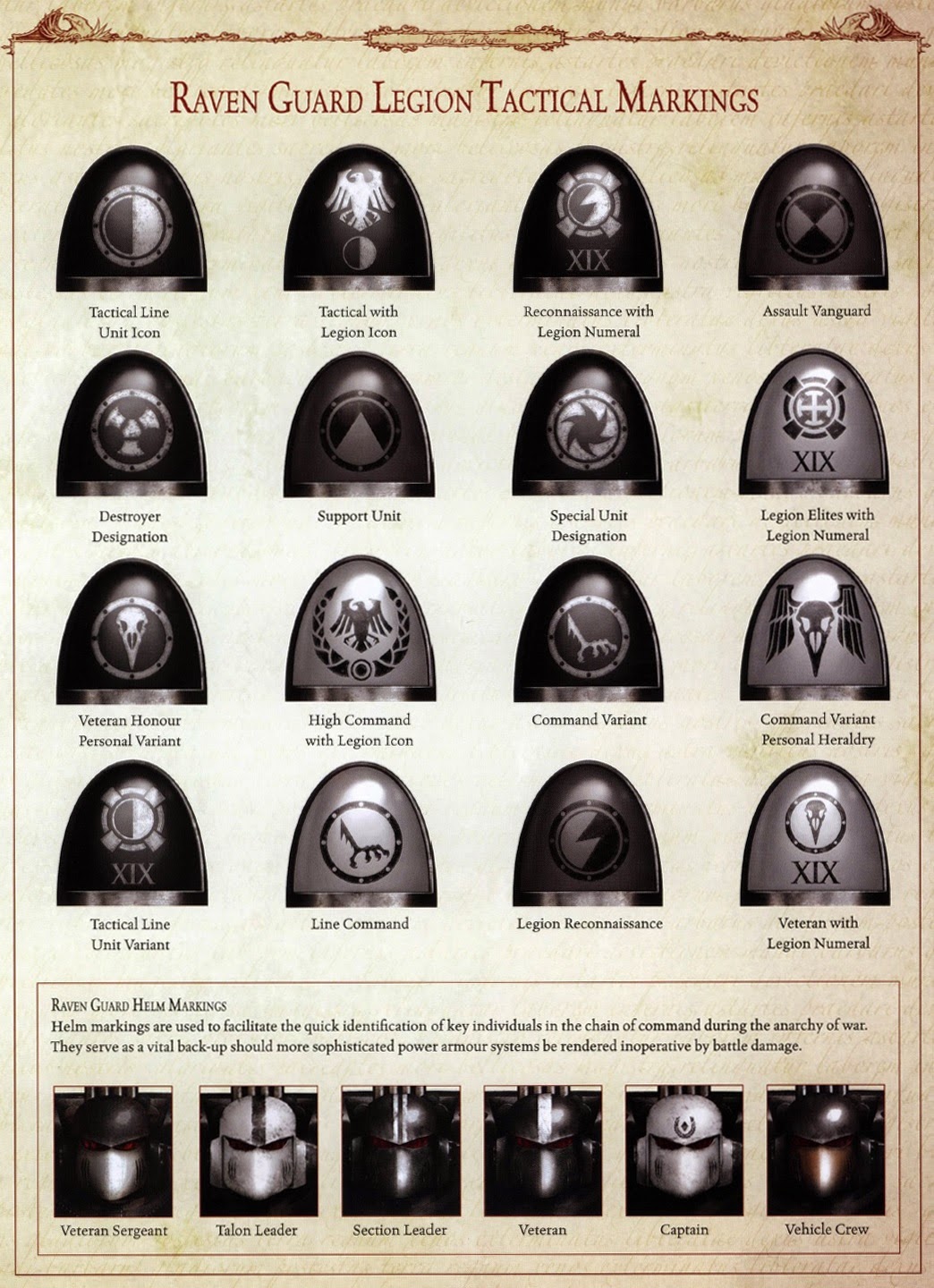 So, based on what we know:


I'm personally still trying to figure out what vintage Raven Guard I am painting. That said, I'm going with the index astartes shoulder pad markings, but I'm doing them in white. I also want to use them in the 40K universe, so I'm using small amount of red indicators to denote the 3rd company. I'm also doing squad markings on the right knee and left shoulder pad and leaving the right shoulder pad for the Chapter Raven. I'm also try not to make them too white, as i want them to feel stealthy, unless they are assault troops or terminators which seem to be unleashed more as a shock troopers.

Anything I missed? What have you guys decided on for you Raven Guard?

"Raven Guard were one of the smaller legions at the time of the Great Crusade. They had 80,000 marines at the time of the drop site massacre, which mean they had ~ 8 Chapters, 16 battalions and 80 companies. So if you are doing markings I would stay with those confines."

It was actually the smallest Legion at the time of the Heresy, locking all other Legions down as being 82,000 or over.

The Legion size was 81,000. 1,000 remained behind at Deliverance while the rest went to Isstvan. However, there are an unknown number of nomad predation fleets consisting of an unknown number of XIX Legionaries in addition to Corax's Raven Guard. It is noted that Corax never seeks them out, not even now.

About organization, FW has it that the Raven Guard (seemingly unique of all Legions so far) has remained truest to the original Terran model. Their only distinction that their dependence upon smaller units for unconventional warfare meant that they more identified with their Companies than Chapters or Battalions, but they did still exist.

The Terran model had Chapters of 1,000, Battalions of 500, and Companies of 100. The 10,000 strong Chapters mentioned likely comes from the Ultramarines, but it is their own unique Legion structure.

Which means 81 Chapters, 162 Battalions, and 810 Companies, though of course I would refrain from using those numbers as rules. No Legion seems to be perfectly organized according to even their own personalized structures.


As for Section Leader, one of the original questions I'm not sure was answered, I don't really know. I have a theory though:

With their preference for Companies as the primary unit for engagements, a Section Leader could be in command of a Battalion or Chapter, leading a whole 'section' of a battle. Or it could be a higher rank to the same effect, placing an officer as having operational command over entire Chapters.

I'm trying to work out how to paint the Black Guard as Heresy era Raven Guard, under Command of Gareth Arendi, previously of Corax's Shadow Hawks bodyguard