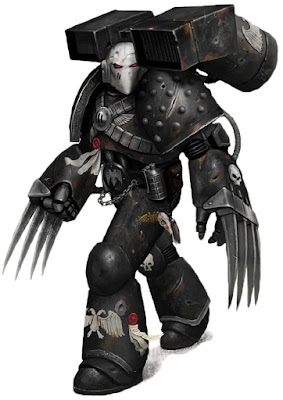 Dark Fury squads are the quintessential Raven Guard. There simply is nothing more iconic than jump pack, lightning claw, Raven Guard marines. So let's take a looks at these guys.

First off, they are Raven Guard, so they get furious assault on the charge, it's not the over top but it's a nice little bump.

Note: Even though Durk Fury are jump infantry and jump infantry follow ALL rules for infantry, Forgeworld has ruled they do not get infiltrate and fleet. Which is a damn shame...

Second, they get the option to upgrade to Raven's Talons for 10 pts a model, which gives them rending and master crafted. It's a pricey upgrade but opens up the option of hunting all legion's elite units.

The new codex gives them ALL raven talons for free! YAY!

So they are a pretty tight little package. Each guy is throwing out 4 I5 attacks on the charge with re rolls to wound. From a cost perspective it's a deal in 30k terms. A standard Legion Assault marine in a 20 man squad starts at 20 points and hits like a wet noodle. For the 10 points you get +1 attack, 2 lightning claws, Sudden Strike, and fateful descent. A comparably equipped command squad member would be 63 points with the special rules, so you are getting close to a 50% discount.

But are they good? It's a tricky question to answer. A naked squad is going to run you 175 points and you will murder basic infantry if you can get them into HTH. But lots of things murder infantry in 30K. 1 typhoon is probably better than 10 dark fury. Another thing to consider is timing. If you start them on the board they will likely get shot dead before they get there. If you deepstrike them, they are coming in turn 2 and assaulting turn 3, at the earliest.

Certain combinations and Rites of war also can give them a bit of a bump to Dark Fury: