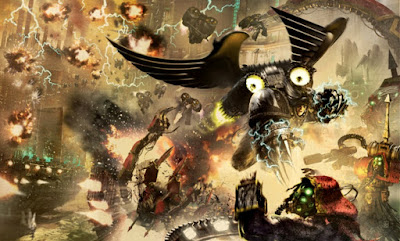 Corvus Corax. Primarch of the XIX legion. The Liberator. The Deliverer. The Raven-Lord. Chooser of the Slain. The Shadowed Lord. Master of stealth, rapid strikes and decapitations. He is cunning and subtle, commanding his units with precision and guile, but all of this is guided by an uncompromising sense of justice and hope for the future of Humanity.

In Part:1 I dove into Corax as an individual unit. In this article, I will take a look at him as a force multiplier and how this impacts a Raven Guard list. In general, I don't usually hear people write much about Corax as a force multiplier like they do with other Primarchs, but with the sire of the Raven Guard rule he is basically adding 2 more ways to play the list.

SIRE OF THE RAVEN GUARD:

This opens up to 3 types of lists:


So why build lists based on outflank instead of deepstrike or infiltrate? Well... three reasons. Point denial. Timing. Late game maneuverability. Outflanking armies can be very strong if built right and used correctly. So let's talk about outflank armies.


Raven Guard have a huge advantage in that they can alpha strike and are thus basically playing with more points than their opponents, but the flip side is not letting your opponent remove points from from you. Using these 2 components together is even more powerful. Simply not deploying units protects them and gives your opponent less time to deal with them. So while a drop pod heavy force lets you null deploy first turn, an outflanking force can largely null deploy for most of the game, especially with some reserve manipulation built in the list.

In addition, Corax himself is a unit that can be played defensively. This does two major things. One, it makes the points spent on Corax hard to kill. Second, it saves him until the later rounds when units are softened up. A large part of winning 30K is denying kill points to the enemy.

With infiltrator armies, the goal is to create zones of superior fire power or hth influence. It's all about being on the right side of the mismatch. This is usually achieved by deploying heavy on a flank or deploying in such a way that you maximize the damage output of your units and minimize the damage output of your enemies units. The concept is easy to grasp from a "space" on the board perspective. But the concept of maximizing timing is usually overlooked.

In general, it's a combination of:
Long range shooting units, maximize their output by shooting every turn and shooting the appropriate targets.

Short ranged shooting units. usually have more decisive weapons and usually only get to shoot their preferred target once a game, so maximizing their output is more about controlling when they shoot. Thus, for short range weapons, infiltrators with transports usually have a timing of turn 1 to 2. Walking infiltrators turn 2 to 3. Drop pods from turn 2 to 3. Flying transports are usually 3 to 4 as are outflankers.

Outflanking forces with some reserve manipulation are powerful because they can pick and choose how to apply these concepts as the game progresses. Outflankers with long range weapons can create moments of fire superiority by catching units between terrain, or without cover or shooting side / rear armor facings. Outflankers with short range weapons can usually take out long range fire support with considerable less protection later in the game. Either because the protection has moved toward objectives or the bubble wrap squads have been killed.

Finally the timing of HTH in outflanking armies is even more delayed. Usually, you will not be able to assault until 2 or even 3 turns after the turn they arrive, which sounds like a disadvantage, but transports are usually just another type of point and timing denial. Assaulting an objective late in the game with not enough time to be killed off or pushed off  that objective is a very strong tactic if you can pull it off.

This element is truly what Corax is helping maximize. Outflank with acute senses allows units that are coming onto the board where you want them. Raven guard also can manipulate reserve timing with Alvarex maun, comm relays and Damocles rhinos. Together, reserve manipulation and acute senses get units coming onto the board at the right times. In addition, 6" run can help units like foot sloggers with melta bombs grab objectives and hunt back field tanks.

Good outflanking units tend to be one of 4 types of unit:

Part: 1 focused on largely using Corax offensively. In general, the mindset is to throw Primarchs into the mix to try to get their points back. But, consider the concept of using Corax defensively as a counter assault unit. He's largely unkillable at range. He has a 24" bubble of anti deepstrike. He will basically murder anything that actually gets to you. Finally, he can jump into reserves and redeploy in the end game to be a late game threat.

Corax's is an interesting Primarch partially because of his force multipliers. They open up new and interesting army types at high point levels, which make tactics that normally wouldn't be good at lower point level viable. And he opens up the use interesting units and list concepts that revolve around jump packers, or out flankers or even static resilient support elements. 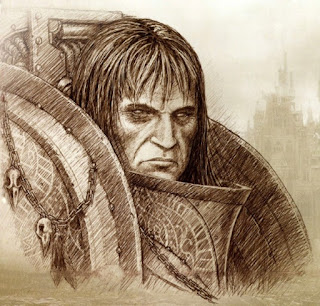 Corvus Corax. Primarch of the XIX legion. The Liberator. The Deliverer. The Raven-Lord. Chooser of the Slain. The Shadowed Lord. Master of stealth, rapid strikes and decapitations. He is cunning and subtle, commanding his units with precision and guile, but all of this is guided by an uncompromising sense of justice and hope for the future of Humanity. 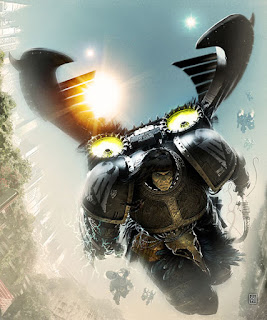 The Raven Guard are known for all sorts of cool, alternative war gear that focuses on stealth and surprise at the expense of protection. Even Corax's kit of gear follows this philosophy. He comes with the Sable Armor, the korvidine pinions and the Panoply of the Raven Lord.

So add up all the rules and the wargear and what you get is a difficult to shoot Primarch that can choose to leave a bad fight.

He is also highly maneuverable and re-deploy-able, and with fleet getting into HTH is a reliable proposition.

Deadly Prey: By the end of the Dropsite Massacre, much of Corax's gear was damaged or destroyed, so a version of Corax is available for 100 pts less. I don;t think it's ever worth taking that Corax, so let's not review it. Only use it in fluffy narrative drop site massacre campaigns. 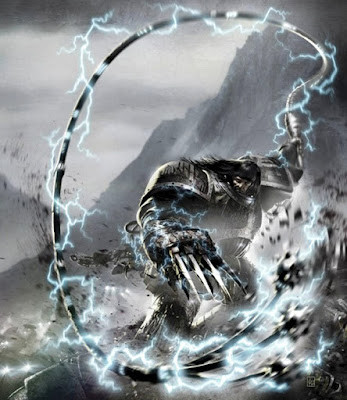 One Corax's most unique abilities is to take 3 different fighting styles:

Death Strike: Corax's tank hunting or high toughness (castellex) fighting style. So you basically can vector strike with 1 S6 AP2 ingore cover hit, shoot with Str 6 AP3 pistols, and then you get D3 Str 5 AP3 Hammer of Wrath attacks plus 8 Str 10 attacks (on rear armor). Or 8 attacks that wound on a 5+ (remember you have shred and blind).

Scourge: Corax's anti infantry attack. So you vector strike, shoot the pistols and then you get D3 Str 5 AP3 Hammer of wrath attacks plus 8+d3 S7 AP2 attacks that shred and blind. So altogether you get 9 + D3 Str 6+ attacks that are a mix of ASP 2 and 3.

Shadow-walk: Corax's tar pit stance. -1 to hit. This is a REALLY good stance in certain situations like when you are dealing with a unit of termies with AP2 weapons. In general, this makes a unit have to hit you on a 6. It also has some synergy with the graviton + blind combo. 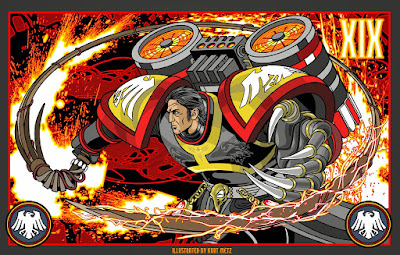 On the battlefield, Corax can be a nightmare to have to deal with. He can hit & run at the end of any combat or completely leave the board at the beginning of your turn. He is more of a blender than a sledge hammer though, so he excels and killing lots of guys instead of obliterating a single character with a high strength attack.

He is also considerably better hit & running in and out of combats. In doing do so, he picks up the extra attack from charging, extra strength and initiative on the charge, a vector hit, the Hammer of Wrath attacks, the pistol shots, and most importantly it let's you shoot the unit with other units in the army before you charge back in. So it should be obvious, but ALWAYS HIT RUN OUT AT THE END OF YOUR OPPONENTS TURN! The other BIG lesson is to watch out for units that have concussive rule. Being Initiative 1 hugely reduces your out put and probably ends with a dead Corax.

At face value it's kind one of those meh stats & rules... But if you take a Forge lord with rad grenades... All of a sudden, it makes more sense to use Scourge against big bad high toughness units and more importantly you OBLITERATE T4 models. So blending your way through multi wound T4 termi units and most characters is an option.

Blind has been nerfed, but you still get lucky sometimes. It also has some synergy with graviton weapons and eclipse missiles (on the Darkwing), which drop a unit's Initiative to 1. Similarly, don't forget that you cause fear.

Vector strike is a strong rule. For one, it can be done against a unit in the movement phase and then you can shoot and assault a different target. The ability to cause damage to multiple units can be very very strong at times. In addition, you can vector strike fliers, which makes Corax a mini anti air unit. Plus the idea of corax pulling jets out of the sky is just epic. 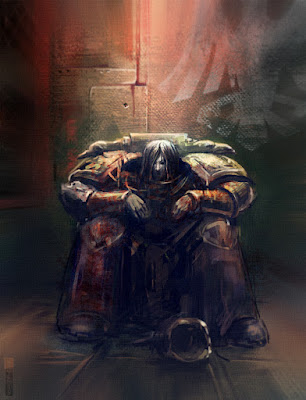 Corax is a bad ass. He hits as hard as Angron but against his brothers, he is just too fragile for a straight up fight. He is a glass canon, but you can help tip the scale in your direction by bouncing in and out of combat. For one this spikes Corax's damage output, but MORE IMPORTANTLY IT LET'S YOU SHOOT AT THE OTHER PRIMARCH WITH YOUR WHOLE ARMY!

No. It's not a fair fight. But if you read blogs you will always see people crapping on Corax as being middle of the road against other Primarchs unless you get luck with Blind. It's fine to look at these scenarios in a vacuum, but for Corax and Cruz it's not how it's going to translate on the table top. That said the major lesson is that anyone with the concussive rule is a total trap, so avoid Horus, Ferrus, Vulkan and Perturbo at all costs.

Anyway, in a vaccuum, these are the results.

Lose against 9 primarchs
Win against 3 primarchs.

So go ahead a fight Lorgar, Dorn and Alpharius in a straight up fight. Against the rest... hit them good turn one and then cheat, run away and shoot them with your entire army :p

Below is the math for a straight up match in a vacuum, shameless stolen from 1d4chan.org

Primarch fighting, while fun to see, isn't a very competitive thing to do as it'll usually tie up both Primarchs for the entire game without either of them dying. With that in mind this section is about how Corvus Corax fares against other Primarchs Mathhammer wise. Please note that all the various abilities are taken into accounts when possible and the match-ups assume the Primarchs are the only ones involved in the fighting, so various abilities like Angron's "The Butcher's Nails" and Rampage do not provide any bonuses. In essence, the fights are supposed to happen in a "Vacuum" for simplicity, but notes are added to make things clearer in particular instances. Also all of the Primarch use their most powerful weapons (because why have a contest if you don't do your best?).