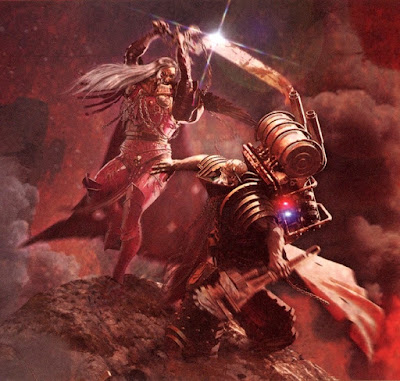 Raven Guard combat doctrine is based on infiltration, ambush and assassination not attrition or frontal assault. The Raven Guard were often deployed to "Cut the head off the snake" to bring enemies to their knees. To represent this combat tactics the Raven Guard have the unique Rite of War: Decapitating Strike.

At first glance, what you get is pods and the good chance to go first in exchange of some force org chart limitations. Now add in Alvarex Maun, who gets re rolls to seize the initiative and re-roll reserve rolls. Now you have an ROW that goes first 87% of the time and can bring in reserves (i.e. pods) reliably as well. So with this ROW you can build efficient first turn alpha strike lists.

Solid Turn 1 alpha-strike units include:
The Decapitating Strike Rite of War also gives Raven Guard access to drop pods. Most legions would turn traitor for drop pod access. We get it in spades.

IMPORTANT: Most people overlook the fact that you can re-roll the dice for first turn, even if you won. With an all or mostly drop pod mounted force, you would normally prefer to null deploy and go second. Go ahead and re-roll that die. #petehappens

What is especially nice though, is that you don't have to take pods for everyone, like in the Orbital Strike ROW. And you shouldn't, especially now that you can't camp out in your drop pods and shoot out of them anymore. Often you will find that infiltrating rhinos are a better choice, so pick your pod usage appropriately based on unit timing.

Finally, pods are great but a list with a combination of alpha-strike and reserves is just as viable.

Good units for reserves:
A quick note on Deathstorm Drop pods. When they land the weapons shoot multiple times, each. They are OK, not amazing. That said, leadership check taken first turn when units are near their board edge can be game winning. Add a librarian for additional tests and a minus to leadership.

Decapitating strike is all about controlling timing, which is what makes it powerful.

To take advantage of this, you should be deciding if you want to go first or second WHEN YOU MAKE YOUR LIST.

IF you are building a list to go second, you will probably be fielding some support units on the ground. Maun comes to mind. He not only helps you land reserves where you want them, but he gives you re-roll on reserves. Note: This is on FAILED reserve rolls. So no re-rolling successful reserves unfortunately. A damoclese rhino might work as well.

IF you are building a list to go first, the ROW + Maun gives you a very good chance at pulling off a 1st turn alpha strike. Raven Guard have the right units to do A LOT of damage quickly. Thus you are basically playing with more point than your opponent and eliminating threats of your choice. Plus with infiltrate, you deploy after your opponent, so you have a huge opportunity to set up locational firepower superiority.

Could you be bothered to write up a couple of rough lists using this ROW like the once you made for the ROW legion recon company? I'm in need of inspiration.

Your write ups are really awesome man. As a new rg and hh player these are my go to guides when ever I am considering tweaking my lists. They are really helpful.

I'd been meaning to comment on this on your Mor Deythan post, but you only mention it in passing there - you outline it more fully here, but you're not allowed to put the Mor Deythan in Maun's Drop Pod. As a Dark Eldar player, this is something that is a fairly common issue as you have an Archon who can take a dedicated transport - but he cannot have a unit ride with him.

If the Dedicated Transport was bought for Maun, then he's the only one who can ride in it. The Dedicated Transport rules state that only the unit that the transport was purchased for (plus any independent characters that have joined the unit) may begin the game in that transport. So, technically, you could have Maun + another IC ride in the Drop Pod. But you cannot have a unit ride with him in it.

I know this is kinda nit picky, but as the 30K tournament scene is developing, this is the kind of thing that might be house ruled among friends, but players should know the restrictions for when it comes to...more formal settings.

Similarly, the issue of Maun and Cameleoline is not cut and dry (trust me, I wish it was) - I've tried to convince others in the past that there's no rule against named characters taking Legion wargear, but I've met with strong resistance against it (old editions die hard.) I tried emailing FW about it, but never received a response.

Your write-ups are great, though - your thoughts on RG have done a lot to shape how I'm assembling my army and playing with them.