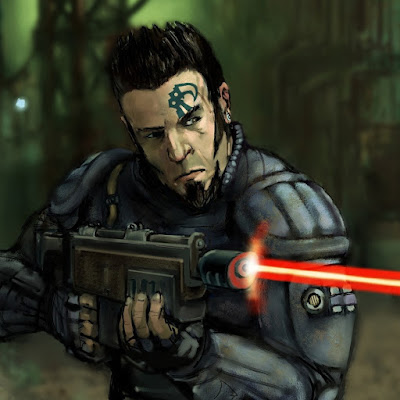 First off, kudos Forge World for launching a ROW that starts melding armies in such a fluffy and awesome way. It's a personal annoyance to me that many tournaments don't allow allies.

More than most legions, the Raven Guard back story is based on humans and freedom from oppression. It's Corax's humanity that sets him apart from Primarchs like the Nighhaunter and some of the other Traitor Primarchs that also overturned the governments of their home worlds. It also adds an interesting guerrilla flavor to the RG tactical doctrine, which otherwise feels like black ops and assassins.


I think most players, Raven Guard players included, largely wrote this off when it was released. I get it... It's a very different feel and requires you to collect a whole new army. Then again, I have 250 IG infantry and about 50 tanks painted. So giddy up suckers!!!

First off, the Zealot rules confers fearless. So for one turn, your entire army is fearless until that game turn. One important thing to note about the wording, is that if you went first you get basically 2 turns of fearless instead of only one. So Maun, might be a nice warlord to get the re-roll on Seize the Initiative.

Another thing to notice is the bonus for slay the warlord. It comes with no downside. The possibility of 2 extra VPs is a really big deal. Especially since you will likely be picking up a slay the warlord point and maybe a unit kill VP. So killing a warlord could be worth 5VPs!!! That's an enormous opportunity. So building a list dedicated to HQ killing is a real opportunity here. It also means, you could potential take Nex and target the same HQ units bumping it up to 6 VPs. That's insane for a secondary objective. It honestly could be worth more than most primary objectives.

Finally, the big rule. Allied Militia are fearless within 6" of a RG. When I first saw this rule, I was crazy excited. But with with Militia being an allied force and the limitation of no immobile units it largely cut down the units I wanted to field.

That said, initial disappointment aside, there are plenty of other options that become nasty when you add the fearless rule. Also, remember this is a allied detachment so you are working with a minimum of 1 HQ and 1 Troop and the option for another Troop, Fast, Elite and Heavy.

One tough choice with this list is whether to invest in Leadership. Fearless in awesome, but it's a house of cards if your Raven Guard "handlers" die. Another tough choice is how you use your troops? Are they offensive? Shooty? Defensive? Depending on what you choose, a provenance might help, but in an allied detachment the cost per model runs really high.

So first off, the militia list is the best and worst codex Forge World has put out for 30K. It gives you HUGE amounts of options, many of them powerful. But in general, it's pretty poorly thought out and the units mostly have crap choices. More Grenades and special weapon options would have gone a LONG way. Plus, what happened to Orders? This codex would have been great! It's like they kept the current Astra Militarium costs and time warped back to the 3rd ed codex... Anyway, back on topic.

In terms of the liberation force you are basically running one of 4 types of lists.
1. Mass Infantry:

From an infantry perspective, I think the obvious choice is the Levy squad for you compulsory troop. 100 pts for 50 fearless guys is really an amazing bargain. In general, I actually kinda like the auxilla rifle since it's a S3 18" assault weapon. Although, it's probably better to do CCW/pistol. The only other real option is maybe the infantry squad if you wanted the krack grenades.

As for your second troop option, I would also likely go with a Levy squad, but the Heavy support squad is an interesting option. 250 pts for 30 multilaser shots or 20 autocannon shots is really solid output for the points.

Following the concept of mass bodies, you can also take Ogryns as an elite choice. They get expensive quick but you can't deny the staying power of 30 fearless T5 wounds with 60 S6 AP 2 attacks on the charge if you take Feral Warriors. At this point you might as well bump you 100 levies up to WS4 and 3 attacks base for the extra points. Sure they are S3 but you get 400 attacks on the charge... Quantity has a quality of it's own!

Which is 460 attacks, and 130 wounds. I might consider tossing the Ogryns in a Gorgon which brings you up to 1200 ish pts. Then you bubble wrap the Gorgon with fearless blobs. It adds something to Raven Gaurd armies that they don;t really have... a true anvil for an enemy to try to push off an objective.

That said, in most situations I think I would normally just take a force commander and 100 levies. It's hard to find a better value for 250 pts in any other codex, and in this list they are FEARLESS. Which is truly powerful. Honestly, this is probably the core to ROW in general.

The other unit worth pointing out is the Rapier Batteries. A quad mortar is only 60 pts! So for 180 point, you add quite a lot of firepower and they are also fearless with a baby sitter. Not a bad spot to hide the force commander either.

So I outlined how this list has the chance as a 6 VP secondary objective. It's obviously hugely powerful and I don't think it really takes that much of an investment. Especially in units that you were probably going to take anyway. So there are options for HQ hunting on both the HTH and shooting side. I think with RG you are probably better off shooting an HQ to death, but really you need a lot of support units to pull this off.

First off if you think about how people run HQs, they are usually one of a couple varieties:
So for you can add all these elements together to get something like this:

At 2500 pts with a little jiggering you could add:

So if you wanted too, you could field some list seriously heavy of fire power. Armies with 12 artillery tanks or 12 rapier artillery platforms, or 40 lascannons or you can pick up 30 multi laser shots or sentenals are a lso a very cheap weapon platform in fast attack. Another totally viable addition is the thunder bolt heavy flier.  Run it with 3 fire raptors and 3 lightings and a couple cheap scoring squads in arvus lighters and you have a really crazy airforce. The possibilities are truly staggering and in generall cheaper than what it costs to run a similar unit in a RG list.

Militia have soooooo man tank options and many of them come in squadrons. You could easily run 9 predators and 3 leman russes. Or consider AV 14 spam. A leman is only 46 pts per AV 14 HP which is pretty close to what a proteus costs you.

I have Raven Guard and I have Militia so I'll have to try playing this at some point.

Among Imperial Militia players, Survivors of the Dark Age is a popular provenance of war as you can build solid 20 man grenadier squads with 3+ saves and a R30 S5 weapons for the whole squad and Rotor cannons that are +1S. Pointwise a squad of 20 fully kitted out in this way costs ~160 points which is the same as the starting cost for Legionary tactical squad which only has 10 models.Double the models with more wounds, comparable armor saves means and a greater range.Combined with thudd guns, I think you could have a good back field holding force that is more economical than using the similar Marine units in those roles and works in tandem with the infiltrating more forward moving Raven Guard elements.

As far as ensuring they remain fearless, it seems like placing a centurion into one or more squads can accomplish this. Either a Chaplain to grant zealot beyond the one turn from the RoW or a Master of Signal to do his backfield Cognis and bombardment thing.