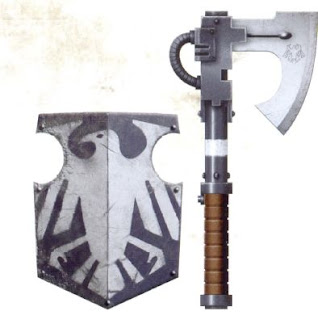 The Legion Breacher squad is not a squad you would immediately think of when you think of Raven Guard. They are basically heavy infantry tactical squads and they are one of the units in a legion army that don't have a standard 40K equivalent. That said, they do make me think of the pale nomads of the XIX legion before Corax took it over. More importantly, they just look damn cool and the shield gives you all sort of modeling and conversion possibilities.

But are they any good on the battle field for Raven Guard? Well... It depends what you compare them too and how you use them.

At first glance, they look like heavily armored, slow Tac marines. You pay 75 pts more than 10 tac marines and you lose fury of the legion. You also lose out on options like CCWs. However, what you gain is a unit that is much harder to move off an objective in hth. Right? Well... is 10 breachers really harder to move off an objective than 17 or 18 marines? Probably not...

So why would I want to field this unit in a Raven Guard army? Well... War Gear in your troop slot.
So how do you use these guys? 4 graviton guns and add a Vigilator...  So now you infiltrate with 18" and scout up 6" and you are very much in the 18" range for your graviton guns.

Then again, 4 rapier grav cannons and a 10 man tac squad is 450pts.  So for 15 pts you've saved an elite slot (+1 mor deythan unit) and you have a unit that has 2o resilient bodies, that scores.

Breachers get a bad rap for being expensive tac marines and it's true for most legions, but with Raven Guard, we can deploy them efficiently without the cost of a transport. In addition, with the Scout Recon Legion or Decapitating Strike ROW, you can use the combo of going first for an alpha strike with vigilators and graviton guns to stop a spartans dead in their tracks before they ever get to move.

In addition, it's important to look at their cost in perspective of the entire list. In general, most armies have the dead weight of 2 X 10 tac marines. Sure tacs can camp out on objective but they probably won't kill anything. With breachers you actually have scoring units that will likely kill a good chunk of points. Plus haywire is a very expensive thing to build into a list. But Breachers with a vigilator really are a competitive alternative to rapier grav cannons or other haywire delivery units.

I also like the idea of having 10-20 breacher marines in my collection for Zone Mortalis games where blast/template weapons are MUCH more deadly. That hardened armor will come in handy. It will also mitigate a tad bit their sluggish movement.

Plus, like you said, THEY LOOK AWESOME! Flipping space marines with shields? Ridiculously cool. If you were going to go special weapons I think you have it nailed, graviton for the win on these boys. With infiltrate and scout? Bye-bye spartan. Shoot the gravitons first, maybe you get lucky and kill it, then bolter the guys inside. I think that's how that could work. Not 100% though.

Melta Bombs are always the hard choice for me. As it is they are fairly expensive and moving to use the melta bombs means you can;t shoot the grav guns. In general, I go one way or the other.

You are right though. They are great in Zone Mortalis. I think When I get done going through all the units I'll add a Zone Mortalis section to them all.

Or maybe just do a zone mortalis article.

You don't always need to go full 20, 4 grav guns are usually no better than 3 (then again, I don't see raiders, it's either Spartans or regular tanks), so that's a way to save 65 points.

Breacher charges are fun in challenges.