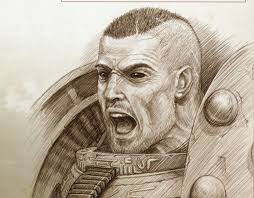 Bad Ass Strike Captain Alvarex Maun. The Master of Descent for the ENTIRE LEGION and second only to Corax. He single handled deployed the entire legion at the Dropsite Massacre on Istavan V.

For a long time I thought of him as a cheap praetor, but really he is a delgatus with a special vox and the bleeding edge rule. If you do out the points he's actually costed pretty appropriately, but his rules have such amazing synergy with so many builds he quickly feels like you are underpaying for this guys and he is considerably cheaper than running a praetor.

Alvarex is not a front line combatant, his stats are that of a consul with a leadership of 10 and his wargear adds only minimal amount of combat ability to a squad. That said, he is an amazing force multiplier and his war gear reflects that. 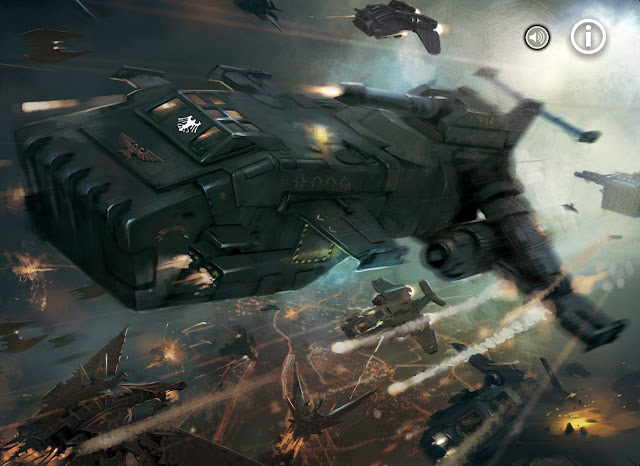 I like the idea that Maun basically has a bat cave of vehicles for him to choose from! Before you get over excited about this, from a pure RAW perspective, Maun can't actually bring another squad with him in any of these vehicles... It's one of those 7th ed, someone screwed the pouch when they wrote the rules things... but basically it's very clear that Independent characters can join squads and their dedicated transports, but there is no recipricol rule. In general, most people will be fine with you throw a squad in, but know that in a tourney scenario, you might get called on it.

While there are a ton of list Alvarex is good in, he basically has two major list builds.

On a final note, alpha strike lists and deep strike lists don't have to be 2 totally different list types. They actually have a lot of synergy. In fact, most list you see Raven Guard players play are a blend and for good reasons. You basically get to mix different timing signatures. for example, if you go flier heavy, it might make sense to add an alpha strike element that can knock out anti air units turn one so your flier come in unmolested. Maun is perfect for list concepts along those lines.

I use Maun in almost every competitive list I play. He's that good as a force multiplier, but he also adds to much to so many builds that it's hard not to want to include him. The obvious ROW would be something like a Recon ROW list where a lot of rules are already duplicated or a Angel's wrath list that is jumper heavy where a hth praetor or corax probably makes more sense.
Posted by deFl0 at 12:31:00 AM

So, a Praetor with a Power Weapon is 110 points.

While his abilities are unique (cheaper and more portable than say a Delegatus plus a Damocles Command Rhino), is he really a value at 140 points with and AP3 weapon and no Invulnerable save?

Well yes. You need at least a delegatus or a praetor to unlock decap strike, in addition you pick up re roll to seize the initiative, which sets up the 87% chance for first turn alpha strike.

That extra percentage is more important than just about anything else you can spend points on in an alpha strike list...

As a bonus you pick up the reserve rolls, anti scatter, etc.

A Praetor with a power weapon is junk... he does nothing well but unlock a ROW.

So yeah, I think Maun is good deal when you think it that way.

this Petey is suck a raven wing dick suker

You have to waste less time to search your obligatory matter on web, because these days the searching ways of search engines are nice. That's why I found this article at this point.
casino-online-mexico.com.mx