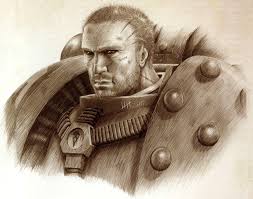 Kaedes Nex. The Blood Crow. A condemned infamous murderer, obsessed with the Hunt. Corax pardoned him and invited him to become a Raven Guard Legionary. Still he was seen as an ill-omen by his brethren, even though his murder-honed skills were employed regularly in Corax's shadow wars.

Kaedes was a Moritat-Prime, deployed on Isstvan V. He vanished into the wastes to stalk traitors on his own terms. Nothing has been heard of him since.

The first thing that should be noticed is that Nex doesn't have Rad grenades... This is a huge loss IMO, but he makes up for it by having a good grenade selection.

Special Rules:
Sooo many rules! And layers of rules! That said, his rules are actually stronger when you realize what they are NOT. He does not have the Lone Killer rule and is not "infiltrated" (usually). Which opens up a lot of possibilities usually looked over.

It's a ton of rules to digest, but basically you can deploy Nex anywhere near an Elite or HQ unit. He is fairly resilient with a 3+/5++ and cover save 2+ to shooting, but pretty vulnerable to being charged.
I'm not being very accurate on purpose here, but trying to present a GOOD case scenario to point out that with the 12 hit cap, you really don't have much opportunity to do much damage.

So is he any good after the nerf???? Well it depends how you use him...

Conclusions:
As a final thought, I have used the callidus assassin for years and years in 40k. She is similar in that she can be very flexible and distracting but is rarely a wrecking ball on her own. To be successful with with this type of model, I suggest you think about it like trading a bishop in chess. The worth of the trade is what you are getting for it. Nex will die if over committed or over exposed. So two ways to get more out of him is to give him support and to chose your moments carefully.

With Raven Guard, I often Alpha Strike very hard, but by the end of the game, I am left with very few minis holding objectives. Nex is so easy to hide, he can be a great end game spoiler unit near objectives.

It should also be mentioned, that you don't need to push all your chips in when you use him. I have a lot of success chipping away at units one or two models a turn. If you kill all the models that can see you, they can't shoot you back without moving... 18" is pretty generous range for pistols, and couple minis a turn starts to add up against rear units, that really don't want to move to deal with you.

Finally, it's sometimes just better to out flank him or just hide him for the entire game. Don't risk his KPs if you are not going to come out ahead in the trade.

"Shooting Damage Output: You are usually going to be hitting on a 2+ rerollable in the shooting phase. Statistically, that means you should hit the 12 hit cap and with rerolling 1's from preferred enemy.."

Only in a decapitation strike list will he get preferred enemy, and only vs independent characters (and how often does that come into play?). So he will only have a re-roll due to his BS6 (that that doesn't help as much). Statistically this means he hits 11 times, so the 12 cap statistically does not hurt him (but of course you no longer have those insane lucky damage outputs).

Goog article regardless as always, hoping to see you finish them all :).

I think he has independent character so the alpha legion can't 'copy' him for coils of the hydra?

This webpage is containing a pleasant stuff with the teachings, I loved it a lot.
casino-online-mexico.com.mx