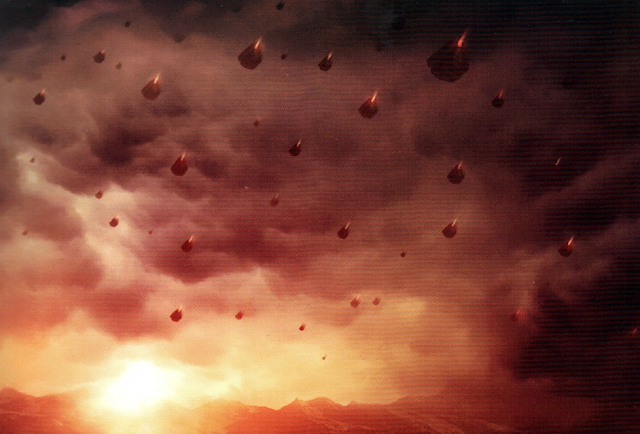 Hit them hard! This strategy works very well with Raven Guard legion rules, giving infiltrate and fleet. There are two options to go with your ROW: Decapitation Strike or Recon ROW.

For Decapitation Strike, you will want to take Strike Command Maun as your HQ. His major benefits to this list are the ability to reroll for seize the initiative, allow reroll to drop pod and flyer reserves, and allow no scatter deep-strike within 18”. The goal is to get as many hard-hitting units forward on turn one as possible. This list aims to be everywhere at once, and doesn’t necessarily need a combat unit; however, a unit of dark furies never hurt anybody ;) The list really needs to be able to reliably kill a Spartan turn one to get to the juicy innards with shooting. The list will include pods to get dreadnoughts and special weapons forward, and take an odd number of pods (three is usually good, with the third coming in empty and bought for either a tactical squad or Maun).

Alpha Strike Recon ROW Style
The second option is the Recon Company ROW. This alpha-strike list will combine infiltrating heavy weapons with scouting assault elements which tear apart infantry and terminators. You will usually take a praetor, delegatus or Corax as your HQ in this as you won’t get as much use out of Strike Commander Maun. There is less of a need to murder a Spartan T1 in this build, as you have a better means of countering nasty terminators in cc.

Beta Strike
Flyer-based Beta Strike
In the beta strike, the idea is heavy use of reserves to support a solid infiltrating firebase. The flyer-based beta strike would do well to make use of a ground-based firebase to complement the flyer’s firepower. A solid anti-Spartan option is still a good idea to make those scary deathstars hoof it. A counter-assault unit is probably a good idea. So we are now going to change our fourth category from Anti-air (which I’m taking as a given in a flyer-based list) to be counter-assault instead. Strike Commander Maun fits in well to this style of list, as he insures your flyers arrive on time. However, there is no particular ROW that gives significant benefit to this style of play; you’ll probably want multiple fire raptors. Pride of the Legion is an option as vet tactical squads and terminator squads can take darkwings as dedicated transports

Drop Pod Beta Strike:
The idea of the Drop Pod beta strike is to open all the vehicles turn one, then drop combi-weapons on the disembarked passengers turn two. This strategy works best with Strike Captain Maun and Decapitation Strike. This strategy works well with an even number of pods to get the maximum number of infantry-killers in on turn 2.

So a couple of thoughts.

I think there is a progression of time signatures in lists depending on units you take. I look at it like this:

So a good example is seekers. Seekers with combi plasmas are a great alpha strike unit in a pod because they do huge up front damage. Plasma tacs are a better beta strike unit because they do strong delayed damage and have a better damage signature over the rest of the game. If you were running an attrition list, naked seekers infiltrating into cover and shooting scorpius bolts are probably you best long term damage per point.

A Beta strike list spikes per unit throughout the game, hopefully at the most opportune time. These lists tend to be reserve heavy, but not exclusively.

Alpha vs. Beta also dictates use of units. Alpha strike list should focus on first turn. So for example, consider speeders. They are very cost effective grav / multi melta delivery devices. In an alph strike list, you would usually deploy that move them forward and try to slag a spartan. In a Beta Strike list, you would deep strike them.

So why is Beta or Alpha strike better?

It comes down to list speeds and timing. Alpha Strike lists tend to cripple units like transports and pin an army into their deployment zone. This is useful for templates, multi charging and ultimately delaying units from getting to a positions where they can be dangerous or able to achieve mission objectives.

Beta list usually work on the opposite approach. As an army moves across the board, fast elements, mid fielders and long range support tend to become further apart. This allows for locational superiority of either fire power or HTH prowess. It also usually means the unit is far less supported by other units, allowing you to pick them off piece meal. But in general, you aggressively go to your opponent.

Counter strike is the same concept but the idea is to wear down your opponent as they come towards you and then punch them hard when their weakened units finally close with you.

Attrition, is complete based on tit for tat. Do you have enough time or enough units to actually chew through my armies resilience.

On a final note, it's fine to think of each unit having one or multiple of these functions and deploying them as such. Approaching you list building this way and then following through with your unit plans is usually how you become a better general.

Damn! Great artcile. And deF10, awesome comment. Heck, it is an article by itself!

Lol. Thanks. I need to sit down and write out the finer points of counter strike and attrition lists.

They are actually really quite viable list with Raven Guard.

On face value RG look like an alpha strike army, but they are great at attrition warfare, especially with the liberation force ROW and fearless militia

I read this post fully concerning the difference of latest and former stuff, it is awesome article.
https://casino-online-mexico.com.mx