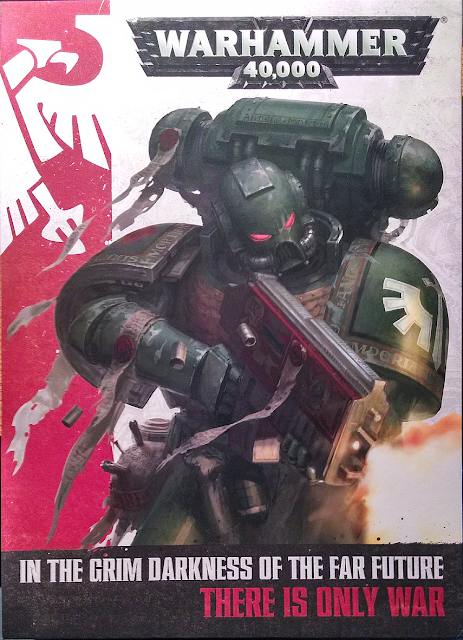 The good, the bad and the ugly. 30K is awesome, but like it or not, it's a derivative game of 40K. As such, changes to the 40K rule set can cause major changes to the 30K universe.

So let's take a look at the 40K rule changes in the most recent Official FAQ that impact 30K and in particular, the XIX legion.

Let's talk about the BIG one first:

1. Q: Using grenades in the Assault phase. Can every model replace their close combat attacks with a single grenade attack or just one model in the unit? Like in the Shooting phase e.g. a unit of 5 Tau Pathfinders charge a Knight. Do 5 Pathfinders make close combat haywire grenade attacks?
A: Only one model from the unit can attack with a grenade in the Assault phase. Per Warhammer 40,000: The Rules, ‘Only one grenade (of any type) can be thrown by a unit per phase’.


This is the NEW infiltrate rule:

You may choose to deploy units that contain at least one model with this special rule last, after all other units (friend and foe) have been deployed. If both players have such units and choose to do so, the players roll-off and the winner decides who goes first, then alternate deploying these units.

If a unit with Infiltrate deploys inside a Dedicated Transport, the same rules apply when setting up their Transport.

A unit that deploys using these rules cannot charge on the first turn.

Having Infiltrate also confers the Outflank special rule to the unit of infiltrators that are kept in reserve.


THE REST OF THE FAQ:

3. Q: Do Scout redeployment take place before or after the player going second is given the chance to Seize the Initiative?
A: Before.
4. Q: Do weapon special rules that say 'a model equipped with this weapon' or 'this weapon's bearer' take effect even when NOT USED AS THE ATTACKING WEAPON?
A: yes


5. Q: How do special rules like Hatred, Preferred Enemy and Monster Hunter work when targeting a mixed unit that contains models your special rule effects as well as models it doesn’t?
A: The rules mentioned are used if any model in the target unit is of the appropriate type.

6. Gets Hot, Gets Hot and Re-rolls Replace the sentence with the following: ‘If a model has the ability to re-roll its rolls To Hit (including because of BS6+ or the Twin-linked special rule), a Wound is only suffered if the To Hit re-roll is a 1; it may also re-roll Gets Hot results of 1 for weapons that do not roll To Hit.


7. Q: Does a flamer firing Overwatch have a maximum range?
A: No.


8. Q: If a flyer which is forced to move 18" forwards due to an Immobilized result ends its move over an enemy unit, does it ‘Crash and Burn!’?
A: No. Use the ‘Wobbly Model Syndrome’ rule, clearly indicating where the model’s actual position is on the table.

9. Q: Flyers can fire 4 weapons at full Ballistic Skill, can they also fire any additional weapons as Snap Shots like other vehicles?
A: Yes.


13. Q: Does the Preferred Enemy special rule allow you to re-roll Gets Hot rolls of 1 for blast weapons (e.g. a plasma cannon)?
A: Yes.


14. Q: Does a unit that is embarked on a Transport that Jinks also count as having Jinked?
A: No.


15. Q: Are passengers in Jinking Transports forced to fire Snap Shots?
A: No.


16. Q: Can a model with both Skyfire and Interceptor shoot at targets that are not Flyers with its full Ballistic Skill when they deploy from Reserve (e.g. Drop Pods)?
A: No.


17. Q: Can you clear up exactly which rules stack and how when estimating cover saves? I’m thinking about Stealth, Shrouded, bonuses from cover, units, psychic powers, Venomthropes, Jink, etc.
A: All of the above rules stack with each other (for example, a model with Stealth and Shrouded gains a +3 bonus to their cover saves). The same rule does not stack with itself though (for example, a model that has the Stealth special rule from two sources still only has a +1 modifier to their cover save, and a model that is Jinking and is in cover can only benefit from one of these cover saves).

Thanks for making these posts and blog, I enjoy reading them even though I'm not Raven Guard player and this is very Raven Guard centric.

Keep up the good work!

Wonderful collection of the posts!! These will be definitely helpful for everyone.
https://casino-online-mexico.com.mx