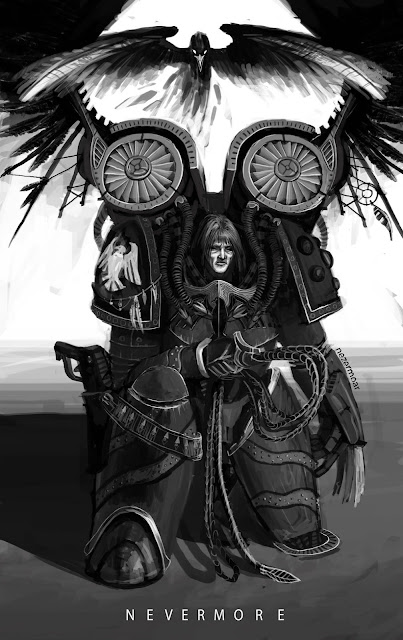 Fellow Ravens! This article is a guest article by Parker Reed, "The Professor".

There are a few units in the Legions Crusade Army List book that people just don’t use. Whether they are too expensive, take up a valuable elite slot, or just don’t really ‘fit’ they are somewhat maligned by us 30k gamers. We will take a closer look at six of these units and see if we can get them to work with our own Raven Guard Legion army lists.

First we’re going to look at everybody’s favorite unit when getting into 30k, but no one takes them because they are astronomically expensive: Destroyers. COOLEST UNIT EVER! Guys with chemical grenades, gunslinging pistols, running around with jetpacks – this is the unit that got me hooked into 30k. NOW, when actually looking at their entry and stuffing them into a list (and you have to stuff them) it becomes a tad challenging. Here are some of their drawbacks:


Not a lot going for them when you look at them like that. They are insanely cool models with some awesome special rules, like coming with rad grenades. They also come with counter-attack, but people probably won’t be charging them – they’ll just blow them off the board with shooting. Here are a couple ways they might be useful: 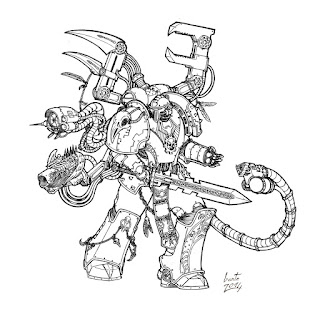 The next is a very odd choice no one really thinks about, the Techmarine Covenant. I would say if these guys could split off and join a unit like the Apothecarion Detachment, more people would use them, because they bring a cool piece of wargear to an assault: rad grenades. Unfortunately there are some drawbacks to these tech-savy chaps as well:


I would say if you want this guy in your list, he’s a cheap way to throw him in a land raider Achilles and keep it alive. That’d be a 35 point upgrade to your tank basically, but it would take an elite slot…That’s definitely the worst part of this unit.

Next up are not really used in our Legion lists due to infiltrate and their models being super expensive, outriders. I love the idea of having a group of 10 or so outriders to throw in different lists, but not only are they expensive models, they are expensive $ wise as well. Some reasons these fellas aren’t the best decision:

These guys can hit like a freight train in combat when paired with the right character (looking at your forge lord with rad grenades) and are incredibly fast to get around the board quickly. I think they are best as an infantry hunter armed with power axes, paired with a forge lord on a bike with rad grenades. Here’s some uses for them: 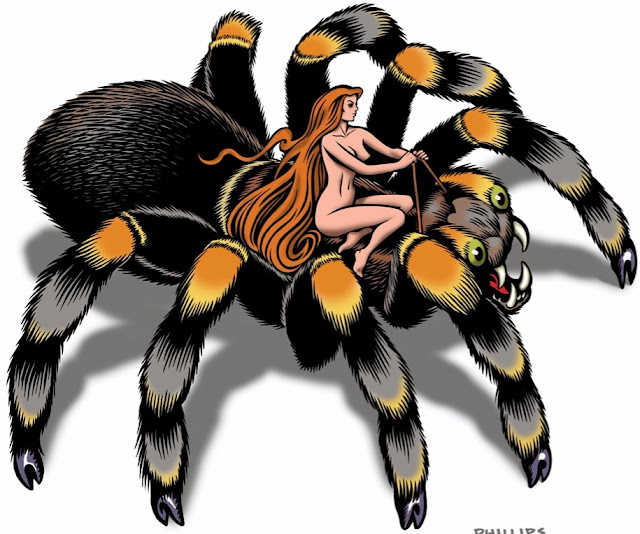 Another interesting unit that I haven’t really ever seen on a table is the Tarantula Sentry Gun Battery. You are getting some tough 6 platforms with 2 wounds that can sport your choice of a heavy bolter, heavy flamer, rotor cannon, lascannon or multimelta w/searchlight. All except the multimelta are twin-linked. The rotor cannon is the poorest choice, tied I think with the heavy flamer. It is just too easy to avoid that area. Though it might be nice to surround an objective with. You can choose a hyperios missile defense system as well, but it’s the most expensive upgrade at +20 points per model. Some issues:

If you are REALLY wanting to bring some Tarantulas to your list, pick anti-infantry or armor and go all in with a battery of 3. A battery of 3 with twin-lascannons and forward deployment (gives them scout) could do ok at popping the occasional rhino or predator.

Next up is a unit that can be a devastating line breaking unit, the Deathstrom Drop Pod. This thing comes down and unloads waves and waves of missiles into the enemy’s lines. This drop pod was designed by our very own Raven Guard! They wanted something to clear landing zones without losing more warriors, our Primarch was cool like that. So what are some drawbacks to this thing?


So a super cool, fluffy idea when running a drop pod or reserve heavy list that relies on the enemy being softened up before a charge. I would say go for the krak launchers and pay for the drop pod assault, which brings it to 145 points. That is expensive, but you are shooting 2 krak missiles at hopefully 5 different targets! 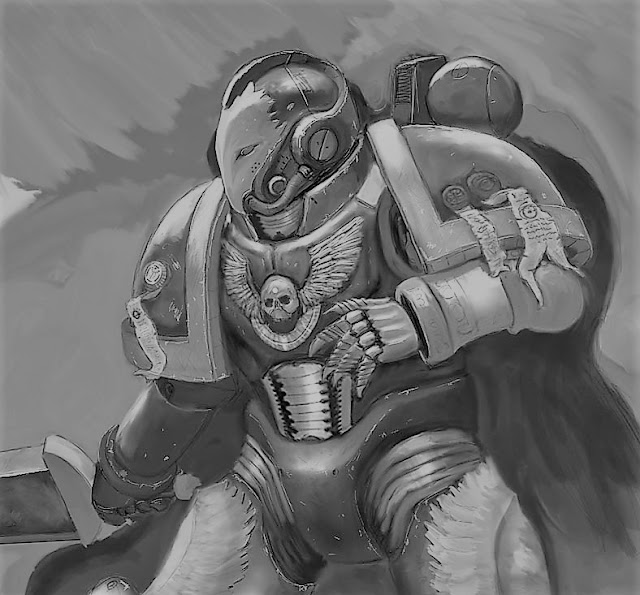 Lastly, and possibly least, is the noble Consul Champion. A super cool character that is solid at fighting, but doesn’t necessarily have the tools to accomplish the task. A consul champion stock will come in at 85 points before upgrades. He has WS6 thanks to the upgrade and gets to master-craft one of his close combat weapons, but HAS to roll and reroll for a glorious intervention and HAS to challenge if he’s able. Not terrible, but he needs some things:

If you want to run a champion, and I wouldn’t say it’s a bad choice they just don’t help your army with modifiers or anything, I would give him artificer armor and a refractor field, plus a pair of Raven’s Talons and a jump pack or bike. With the furious charge bonus from By the Wing and Talon he could be wounding on 3’s with shred and rending, which isn’t half bad. I would go with a command squad kitted out for combat and to keep him alive, apothecary fits very nicely here, and they will do good things for you.

Let us know us know how you feel about these units in the comments below!

A true Raven Guard unit. Nothing is cooler that double pistols. I think FW just missed the mark by not giving them all pistol options and the gunslinger rule. In general, they are tac marines with rad grenades and and counter assault. But while a tac marine is 12.5 each a destroyer is 30 points each. Rad and counter attack just is not worth 17.5 points. For comparison, a Vet squad is 20 points for a free rule & scoring & an extra attack...

So the only way to make them better is to stack modifiers on them. Raven Guard at least give them infiltrate and fleet, but still, what's idea? 5 guys missile launcher and a phosphex grenade and go play catch?

Ultimately, I really only see these guys as an option in Zone Mortalis. Shred and reduced scatter on the rad grenades is really quite powerful in confined corridors.

Another rad unit! But you can't join a squad... which is basically what makes them rough to use, and the servitor units don't really add much.

The one use case that might actually make sense is if you took a storm lord as a super heavy. It's a great tank that you can shoot out of. And because it's a super heavy, you can put multiple units in it. So a tech marine could jump out here and there and make a repair.

When would you use a Storm Lord? Liberation Force is interesting with 100 fearless mooks bubble wrapping it. Odd Raven Guard list, but if you are playing a campaign and need to HOLD AN OBJECTIVE AT ALL COSTS, it could be a fun and powerful option.

I'm probably one of the few people who really wishes the game had a lot of "bring your own defensive terrain!" YAY!

From a fluff perspective, all the legions are constantly running the gauntlet of sentinel guns and the like... bu I digress. Tarantulas are weirdly basically a fortification in the standard codex. But they are really expensive. It's a shame. You could add some cool element to the game if they could get the rules right. As it is... I'm not sure hwo or when you would ever use these guys.

Yet another VERY Raven Guard unit invention that is horribly priced or poorly ruled. For one it would be nice if these could be take is 1 to 3 slots. They were also very interesting when they had drop pod assault and you could take them as cheap options to stack your turn 1 drop pods. Now as it is, you have to decide to either be super aggressive with them and try to max out shots or be long range conservative. In the conservative model they don't really have enough shoot to be interesting for the points. Used aggressively they can be a fair amount of firepower but are really easy kill point.

The most clever thing I've figured out is a libby with telepathy dropping leadership and trying to pin units... Is's a shame. I love the model and the concept, they just are priced poorly.

So champions might have a place in other legion where they have better access to strong HTH weapons. Personally, I view the delegatus as the tactics side of the Praetor and the Champion as the HTH side. I think what they should have done is to let the champion pick from the praetor wargear. Fielding a couple Paragon blades would land these guys on the table.

Outriders with a forgelord was exactly where my mind went when I first saw the Recon ROW.

Where do you park the forgelord and Praetors? One in each outrider squad?

The deathstorm drop pod fire 3 Krak missiles ! (at least since the last redbook Age of darkness Army list) on 4chan and other site they wrote 2 Krak too, so I guess that no one noticed the change.

No toss in a librarian with guide... And terrify...

Depends what I'm facing really if I'm facing lots of fancy 2 wound terminators they both go together for the paragon blade chopping them up real quick on the charge. I tend to split them all up tho depends what the fire power is like. Command squad usually do well on there. Some times run a preator solo. If you survive turn one the opposition doesn't have much left next turn 😂

On the turn where the drop pod land, every unit within 12" take D3 x3 missiles no matter how many face of your drop pod can see the enemy unit, during the next turn yeah you can shoot with 2 x3 missiles if you can see the same unit with 2 launchers (this unit have to be the closer of the two launchers)

This is one amongst the informative blogs that you shared with us.
https://casino-online-mexico.com.mx