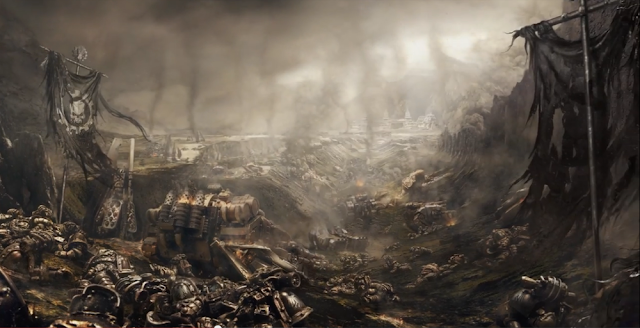 How to base an army is always a hard decision. A dark Base on a bright army can really make it pop and bright base on dark army can help the army be noticed. From a tournament perspective, by brightly colored armies have always received higher painting scores and more fan fare, but with my Raven Guard, I'm very much building recon force, so I want it to feel dark and sneaky. I also feel that the Raven Guard are really the stars of the dropsite massacre. Sure they are decimated, but they are survivors and it's the pivotal battle that really kicks off the Horus Heresy.

So I decided to try to do a basing scheme that feels like Istavaan V.

Istavaan V was rendered barren long before Imperial conquest of Istvaan System. Istavaan V was originally a life bearing planet but after a period of tectonic instability, volcanism there was long-term geological degradation of climate and biosphere. The Dropsite Massacre further scarred the surface of the planet with fortifications and trenchworks, not to mention a planetary battle between 10 Legions!!!

So I wanted the bases to feel like battle torn, jagged, scorched earth. For the main elements I used orchid bark and sand held onto the base with PVA glue. 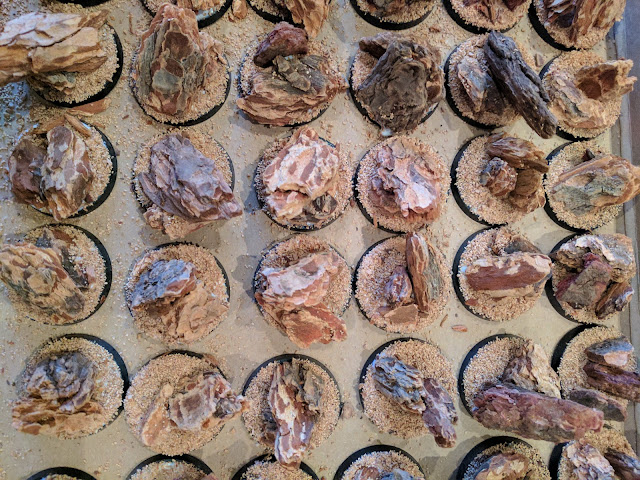 For my Dark Fury, I decided to add a special element to the base that would tie their bases into the awesome bases that come with Corax. His base has broken tiled flooring on rubble.

I used ROBOGEAR tiles, that were 24 for $7. WOOT! The nice thing about them is that they snap easily with you hand and give a nice broken feel. They are two sided with different size tiles. 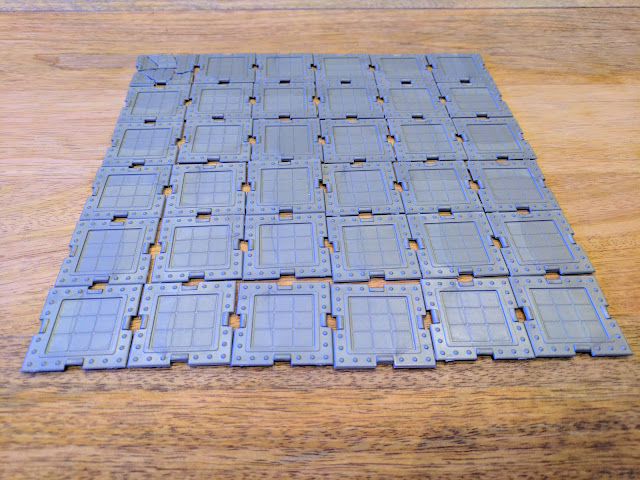 At some point I decided I wanted some pipes. I used the spindle from our doggy bags! My wife gives me shit because I collect random stuff in bags for bases and terrain... I had to show her I actually use the crap occasionally... right? 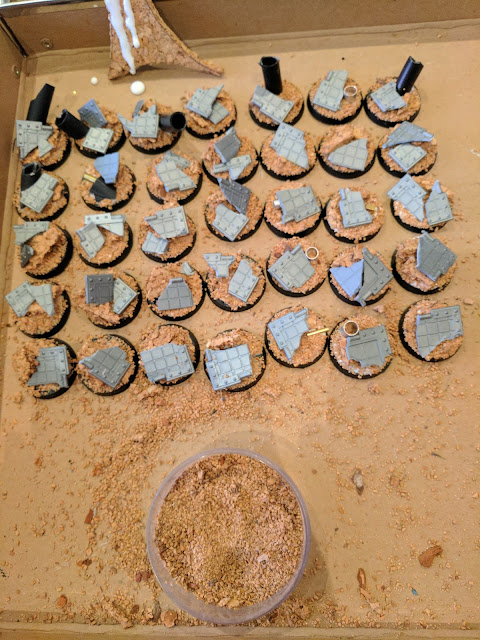 Paint it Black. I hit it with a black primer. With sand in particular, I find priming it really helps stick it to the base. I've found spray primer is just more resilient than primer out of an airbrush. So the good old cheap primer can is my go to. 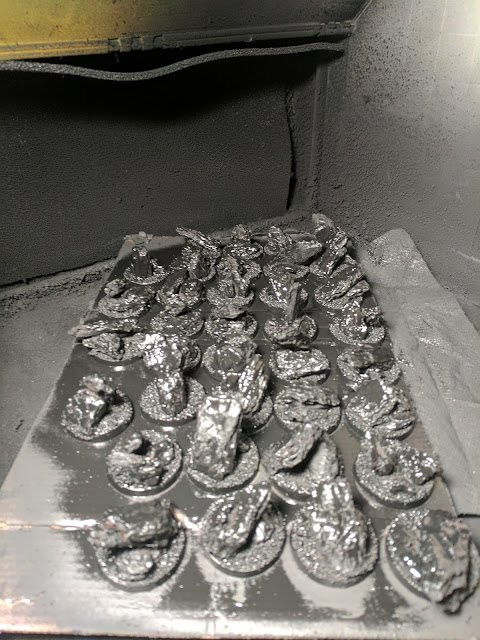 Paint it Grey! I used Vallejo Cold grey, basically to get the rocks grey. It's important to really get in the cracks as brown poking through betrays that your rocks are really wood... 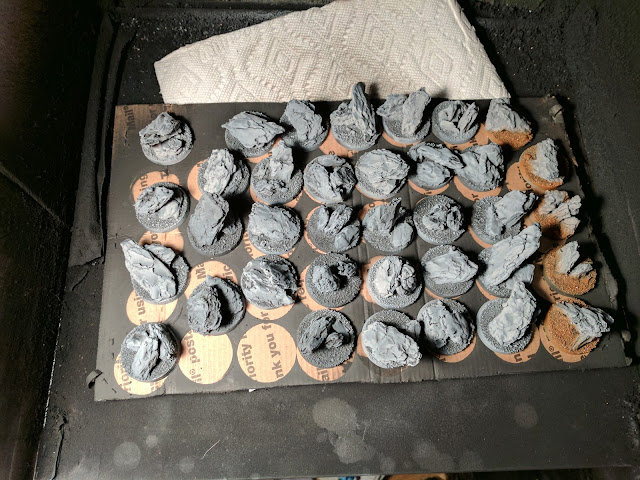 Sooooo... if you know me, you know I like to batch paint HUGE chunks of stuff at a time. So that it all matches perfectly and I have all the paint nice and new.

This tendency makes my overall progress take a long time... which sucks when you are on deadline for Adepticon!!!! AHHHHH... I can't change....

Anyway, I bought some pretty, pre painted battle field terrain from GF 9. Honestly, it's nice and would be fine for table top use, but just had to make it prettier... 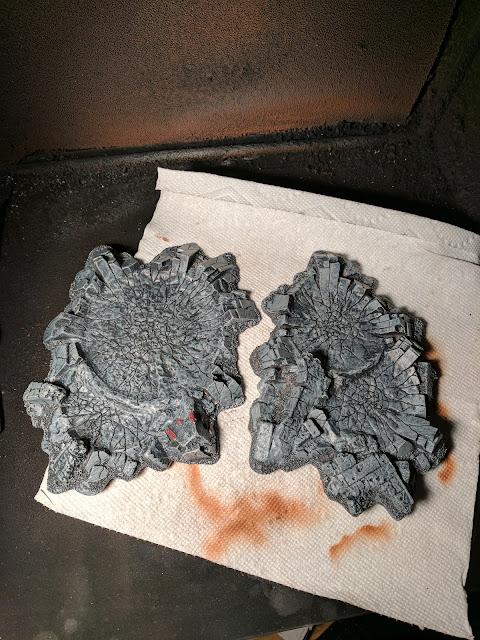 Soooo... about painting things that aren't in your Adepticon army... My Raven Guard have hover Rhinos. Which is fucking awesome!!! But that means they need bases... So why not build a base and cast it multiple times (Thanks Brookie!). 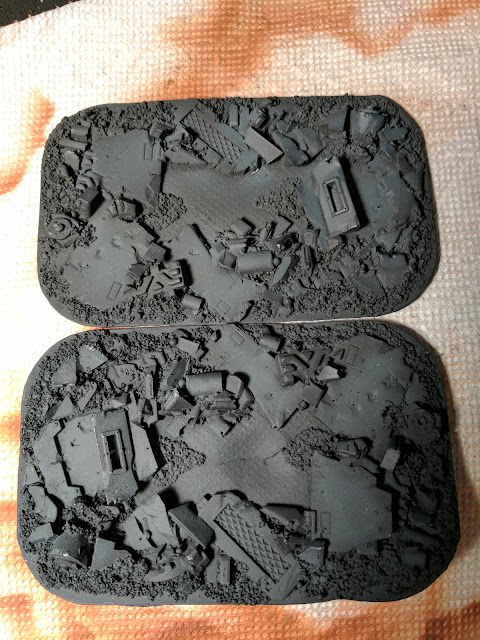 Paint it Brown! For this step I used Vallejo Earthen brown in my badger chrome airbrush. It's fine if you get some brown on the rock. Nature is dirty and you will be back blending it in the next step anyway. 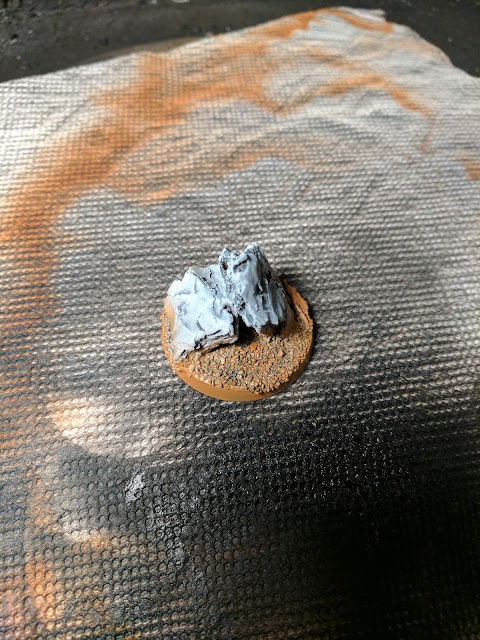 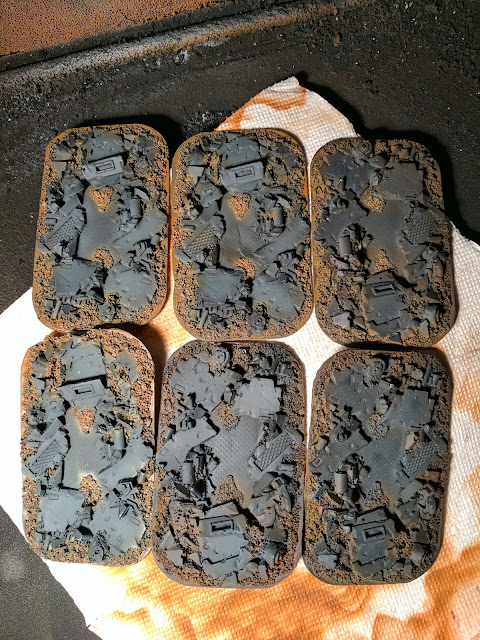 Dust it black! So first, I rotate the base hitting the edge with Valejo Air black. This does 2 things. First it gives a nice uniform black ring for your bases across you army and second, it give you a uniform dark edge so the middle of you base pops. 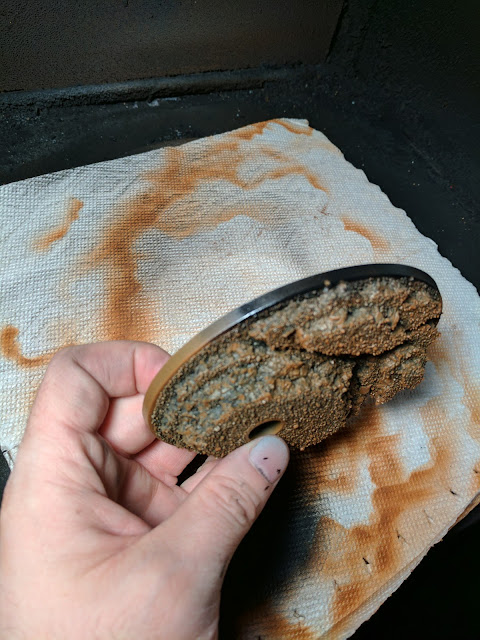 For the rest of the base, I dust the top of all the rocks with black. This tones down the overall color, but also gives everything a very burnt and smoke touched look. It also can be used to blend the grey of the rock and brown of the sand together into a nice transition. 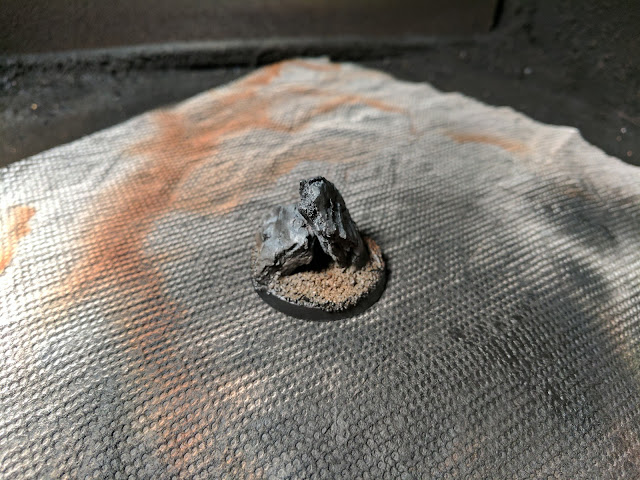 Finally, I blackened the tops of the rocks. It sounds counter intuitive that the high spots would be dark and the low spots would be low, but when you see the effect, it looks much more sporched earth tahn if you went down an "ink" route. 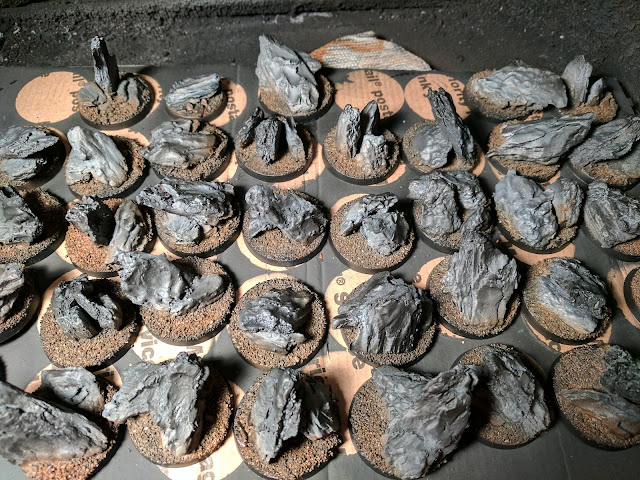 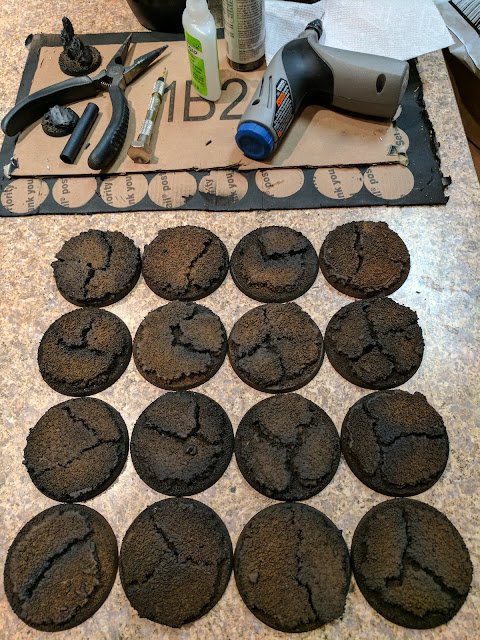 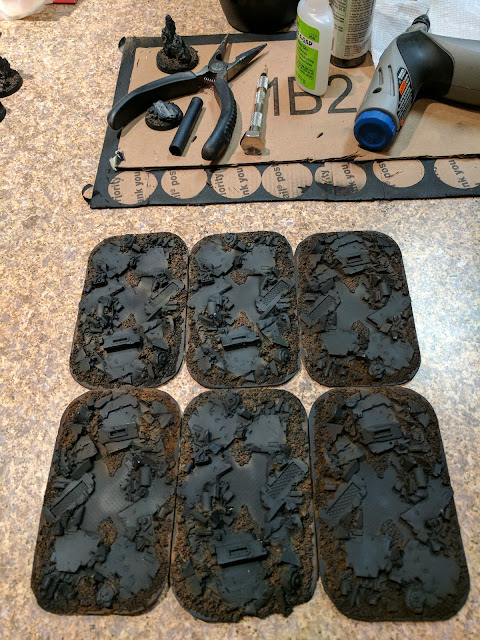 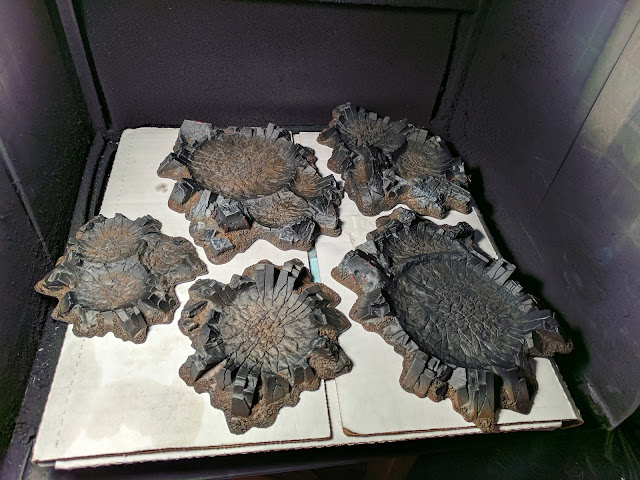 Add minis! Ok... I'll need to paint some silver and add some battle elements at some point...

But, I'm still painting feverishly, so add some more pics if we get there before deadline.

Just for fun, I threw some Raven's on for you guys. I'm not actually sure how I will even field these... but they are goign to look fucking cool.

They are just primed black at the moment, but I think they will accompany the jumpers just to give a cool feel to my display base!!! 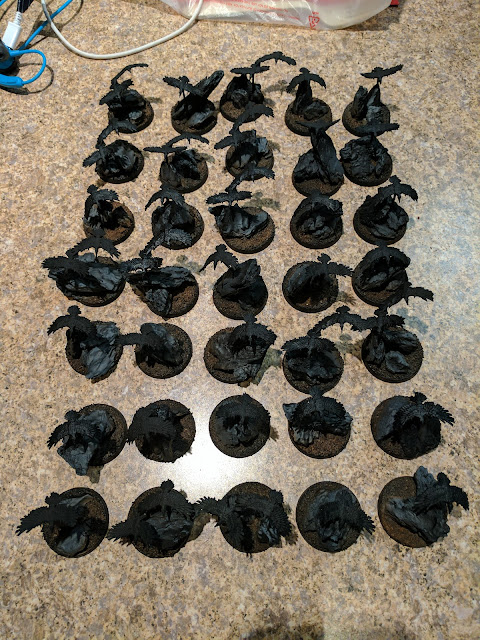 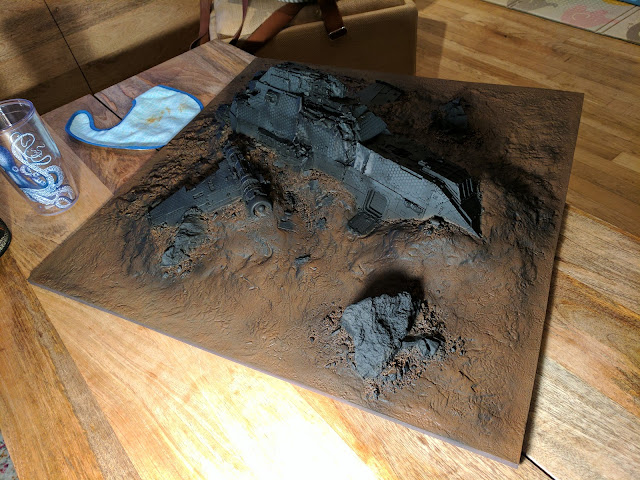 Like I said... I batch paint!!! Everything is slowly coming together...

You have an effect on is totally appreciative and full of interest.
casino-online-mexico.com.mx