8th is here! As with any new edition, it starts with a lot of math. This edition, GW is pushing the power points, which are a rough and easy way to build a quick army and get it on the table.

Personally, I think if they had reduced the options at a squad level they could have made this real option for competitive play. As it is, the units can actually vary wildly in power depending on armament, which is unfortunate. They have done a good job of streamlining most other elements of the game.

So for competitive play, they gave us points. Which is fine. But the base model doesn't include weapons, so you end having to find the core unit and core gear just to get to the base costs of troopers. Then you add it all up. It's not a bad way to go about it, although from a game design perspective you end up with weird pricing when you have armies with varying BS or WS. In general, it looks like they used the core to hit roll of the armies to calculate the costs. So you see deals for things like WS 3+ Scions in a guard force with plasma guns.

Anyway, all this math and tallying is made considerably easier with this army list builder, which is free and has most everything already loaded into it. 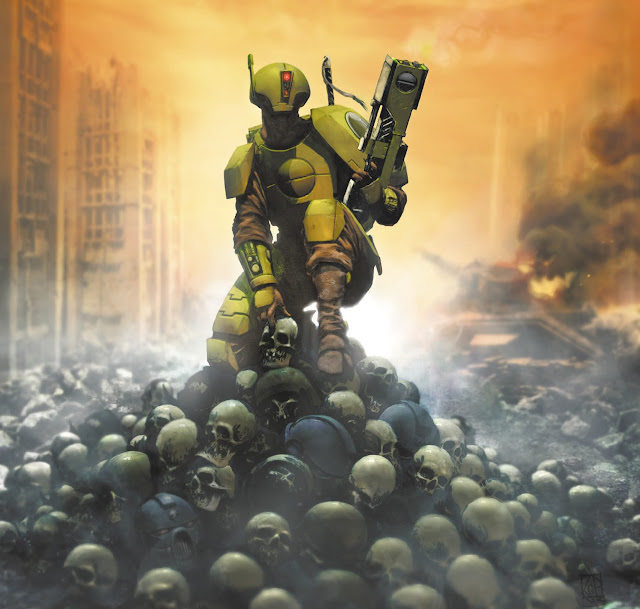 Greetings nerds…
Elrodogg here to bring some special guest author thoughts on the new edition and everyone’s favorite galactic buddies, the Tau Empire.  A bit about me, I’ve played GW games since 2nd edition of 40k and 5th edition fantasy.  Starting out as a primarily 40k player I slowly became a mostly fantasy player, then at the drop of AoS, I dropped GW completely and switched to Malifaux (a great game everyone should check out but I digress).
Like many others, I was turned off on the direction that 40k was going with detachments having crazy rules, the super best friends armies, unkillable deathstars and so forth.  I age myself, but I greatly enjoyed playing 40k in the 3rd and 4th edition days of a single force organization chart without all the “crazy”.
The 8th edition rules summaries lent credence to the idea that GW was trying to tone back all those rules in favor of a simpler more straightforward game.  Specifically, it was the changes to vehicles and the change to modified armor saves that really won me over (that and the elimination of the above problems). Finally, the rules were available and just a couple of days I was able to get in a game.
So without further delay, here is the first article in a series I am planning on writing on The Tau Empire.  This time we are going to focus on weapons and doing damage.  Later articles will cover the different units, survivability, army composition, etc.  Let me just start it off by saying that overall, I think Tau are in a good place this edition. 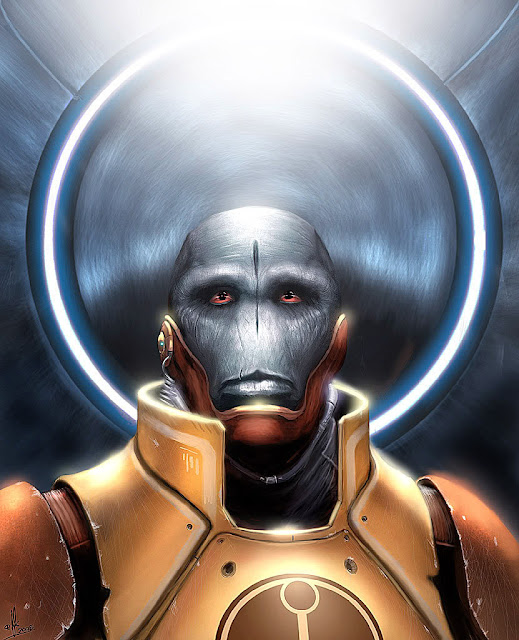 Tau are known for their guns.  Without a doubt, they have such a great variety of guns that you really have to pick what approach you’ll be going for.  I think a lot of the early going of the edition will be spent figuring out the best way to deal with both hordes of bodies and with tough models.  You’ll want some weapons that do d6 wounds (or at least several that can do d3) to take out chunks of tough tanks/demon princes/tyranid monsters but those shots are wasted when you’re staring at 130 orks.  I will be reviewing some select weapons based on what I think can work.
Tau have a great weapon that’s essentially a jack of all trades in the missile pod.  2 shots at s7 ap-1 d3 wounds means that you can do some real hurt to medium multi-wound models and have some level of fire volume to take out things like orks and infantry.   That said you pay for it… 24points isn’t cheap.  I think you’ll see these on Commander models that hit on a 2+.  You get the “Max Value” for the weapon if you get it to work.  Oh and it has a 36” range… not too shabby. 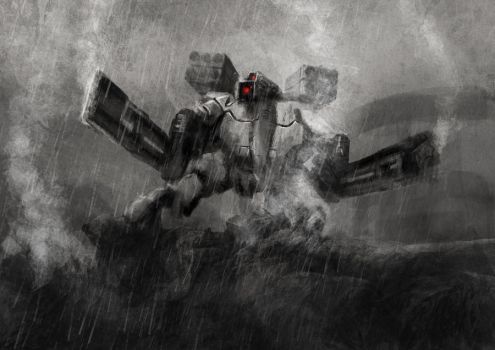 Railguns are the weapon of choice in taking out heavy tanks.. shocker.  With the addition of command points giving you rerolls, I think you’ll be seeing a couple of railguns in people’s lists but these will receive a disproportionate number of rerolls.   Say you hit and wound with a high priced railgun, but you only roll 1 or 2 wounds… prime target for using a command point reroll.  I can totally see taking a single broadside suit, giving it a heavy rail rifle, plasma guns (cheaper than a SMS system and better at doing a couple of wounds to a tank).  The mortal wound on a to roll hit of 6+ is just icing on the cake as it means you can actually one-shot a rhino (yeah it would take two successive 6+’s to happen but its possible). 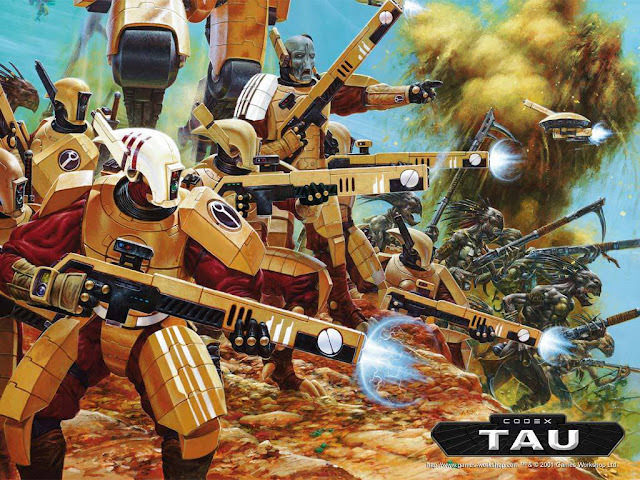 The next thing to discuss are pulse rifles.  I think that Strike Team fire warriors are really legit now.  Take 12 of them, add in a markerlight and at 99pts you have a unit that can start affecting the game in the first shooting phase.  One thing to consider with them is that they have a 4+ armor save, so if they are in cover and haven’t moved they are on a 2+ save.  That’s huge for early game survivability.  A lot of small arms fire has only a small armor save modifier, so you’re saving on 2’s and 3’s mainly.  In terms of damage output, they really shine with a fireblade nearby.  Rapid fire means that at half range (15” is a good bit of distance still) they are taking two shots, and the fireblade bumps their damage output to 3 shots.  Now add in a single markerlight hit and you’re rerolling 1’s.  Assuming you have all 12 alive, at half range you’re taking 36 shots, approximately 6 will be 1s, rerolling those to hit on a 4+ means 3 extra hits.  Also consider that it helps prevent that really bad volley of hits.  If you roll a disproportionate number of 1s, then rerolling those helps to mitigate the bad rolls.
Last but not least are markerlights, which are interesting.  It is very easy to get a single markerlight hit on a target, as a Cadre Fireblade can do that on a single roll to hit of 2+ (prime candidate for a command point reroll if you miss).  The single markerlight hit is key as it gives you rerolls of 1s.  Then, if you really want something dead, shoot your unit of pathfinders at the target.  At 80points, a unit of 10 of these guys are a steal.  10 shots, hitting on 4s would normally mean you’re getting 5 hits, which is good but you really need to guarantee that 5 result to get the +1 to hit on from the marker chart.  So… add in that you already have 1 from the fireblade, 10 shots hitting on a 4+ while rerolling 1s means you would be hard pressed not to score 4 additional hits.  Remember that the chart is cumulative, so now whatever you’re shooting at will be at +1 to hit, rerolling 1’s, so that Tau basic to hit roll of 4+ is looking a whole lot better.  Units like stealthsuits that can pump out a really high volume of fire absolutely love all of this.


Important Note… I will not be discussing the Vespid Neutron Blaster because the models are ugly. 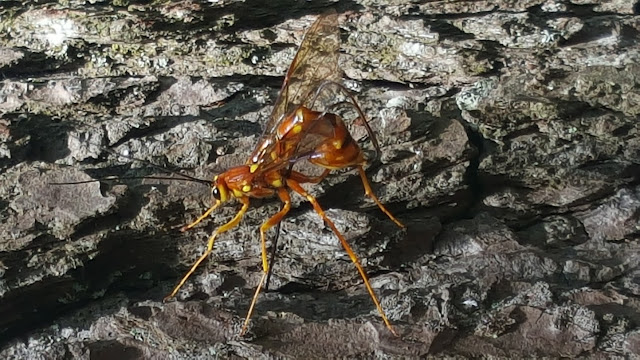 Actual Vespids sighted at Elrodogg's boat house last summer... I wouldn't say anything bad about them either! 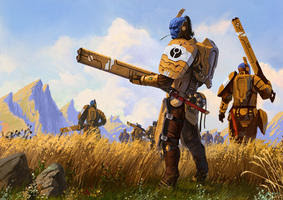 My first impressions in terms of units and what are winners are: 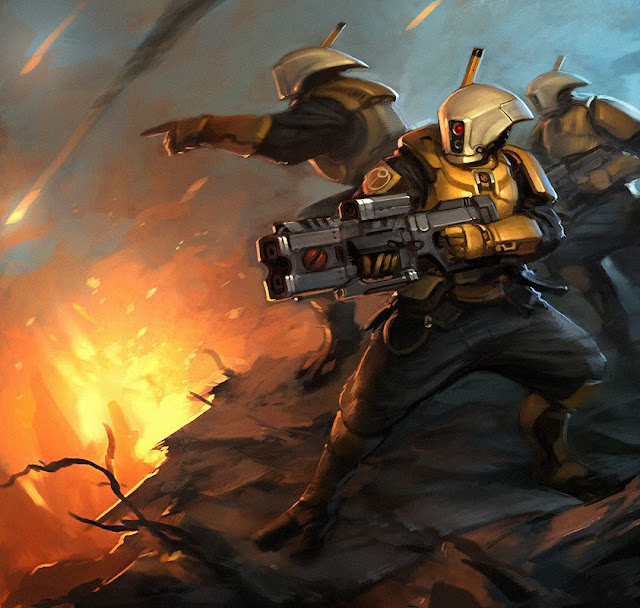 I want to wrap each article up with an army list based on my experience thus far.  Taking an army based purely on the winners I mentioned above (and a Stormsurge which while I haven’t tried out yet but the model is amazing).  Unless my math is wrong, that’s 1998 points and has 7 command points.